The Mineral Collecting and Mining Songs of David K. Joyce

Music by David K. Joyce
The Musicians
The people behind the music
The Songs
Song Lyrics and anecdotes
Other Music
By David K.Joyce
Videos
Performances and more
David K. Joyce has been a musician and songwriter longer than he has been a mineral collector and dealer! In the last number of years, David has, for some unfathomable reason, written increasing numbers of songs about mining and mineral collecting! By popular demand, he decided it was about time to do something with them. 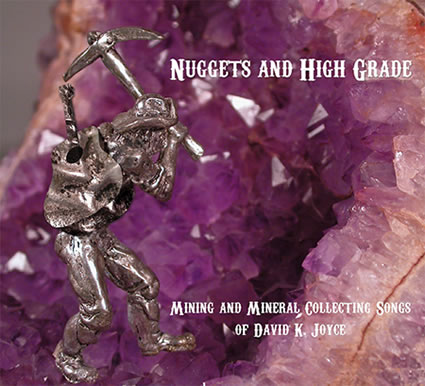 Who knew we had a genuine mineral and mining bard in our midst? These songs are surprisingly relevant and entertaining. Great fun, indeed!" - Dave Bunk, Mineral Dealer

Mineral collecting songs?! These are all amusing, technically correct, field collecting-oriented songs about mineral collecting, geology and mineralogy. You’ll be able to tell right away by the titles of the songs that these are not ordinary songs: “Agate Lickers”, “Crystal Systems”, “The Mineral Dealer”, “Diggin’ in a Hole” and “The Crystals That I’ve known” all give a hint that these songs were written BY a mineral collector FOR mineral collectors. Who else would write them!?
"Size counts in tourmalines
and dinner plate sized sphenes
Apatites that look like logs
Zircons the size of dogs”
From “Crystals that I’ve Known”
This Unlike many mining songs, most of David’s mining songs are upbeat songs about mining life. The “Packsack Miner”, is a tribute to the “tramp miners” that were prevalent during the days of small mines in North America. “Highway 17” is a poignant song about life and travails in a mining town where the mine has shut down. “Miner’s Home Tavern” is a ditty that immortalizes the old drinking hole at Cobalt, Ontario where generations of miners have gathered to tell stories. David spent happy hours there when he attended the Haileybury School of Mines, just a few minutes away.
“The tavern’s filled with lots of guys, telling tales, swapping lies
Only the truth is told today of giant blasts and bonus pay”
from “Miner’s Home Tavern”
"I listened to the songs with a big smile on my face and my young son rocking on my lap :) A must-have CD for all mineral collectors. No mineral gathering without this CD!" - Frank de Witt, collector

David has been performing some of these songs for years to mineral friends on field trips and at mineral shows. They seem to like them! This made him decide to record some of the songs and distribute them to interested people! After all, the more people become familiar with them, the more people will be able to sing along at the right time!
Perfect music for travelling to collecting spots
Great fun to listen to with mineral friends
Excellent prize for Club members
Listen to it on the way to Gem and Mineral Shows
Every Mineral collector should have a copy!
How can you buy this music?
1. Just scroll up this page and click on “Shop Online” and add a CD to your Cart!

2. You can purchase all of the songs on iTunes, as downloads.
MineralsLatest AdditionsReduced Prices
Recent Activities
About Us
ArticlesUseful Links
Music
Contact Us
Privacy Policy
Home
Copyright 2022 David K. Joyce
Website developed and managed by Wenex
Menu
close
dkjoyce@bellnet.ca
647-233-8125