Every Fall, a group of us descend on Gibson Road east to collect minerals. We go at it very hard and usually end up with some well crystallized Grenville mineral specimens. We did it again in the Fall of 2020. The COVID-19 pandemic meant that Terry could not make the trip from Nova Scotia to join us. That was a shame since Terry is a key member of "The Tory Hill Gang". So, it was just George, Ray and me.
For a bigger article on our Gibson Road East collecting exploits, go to the "Articles" section of this website and check out the "Gibson Road East" article.

This year, we decided to concentrate on a zone we called "Midway", due to its location midway between two other past projects. It was right beside a calcite vein dyke that we excavated a couple of years ago. This collecting though was in pretty-well solid rock, riddled with small calcite seams. Sometimes some calcite was present but mostly, the calcite had been naturally etched away over the millennia. The mineralization at this location consisted, mostly, of bladed crystals of fluoro-richterite, microcline crystals, relatively rare fluorapatite crystals and augite crystals. We also encountered one small zone of very good (for the Grenville, smoky Quartz crystals) No titanite crystals, although we recovered many good titanite crystals just a few feet away in the calcite vein-dyke.
We spent five days pounding the rocks using a variety of tools and techniques, to expose pockets and seems of crystals. Here are photos and captions that attempt to capture the efforts. 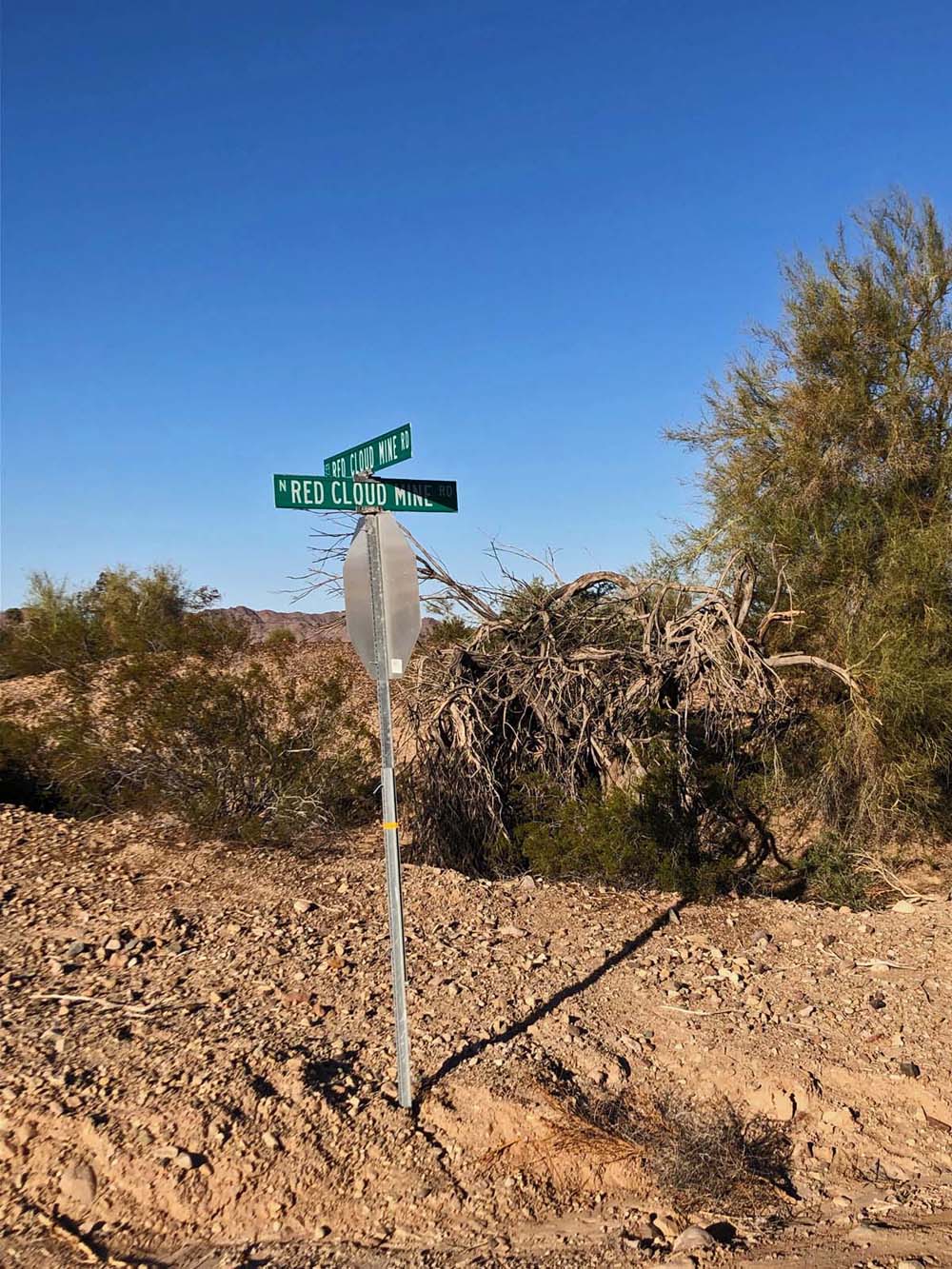 We never know what kind of weather we will run into, during our collecting time at Tory Hill. This year, we started a month earlier to accommodate George's schedule. George is a professional, full time farmer and has to plan his collecting between all important activities, especially the various harvests and needs of his milking cow herd on his farm. This year we started during the first week of October. Luckily, the "Fall colours" of the trees in the area were at peak during the first few days of collecting. 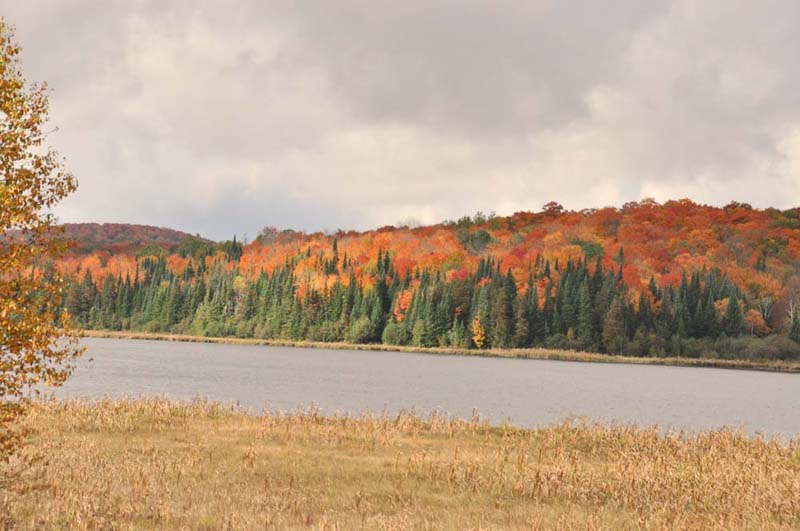 This is the little lake that you see when you drive through Tory Hill, Ontario. Gibson Road East is on the north side of the lake. 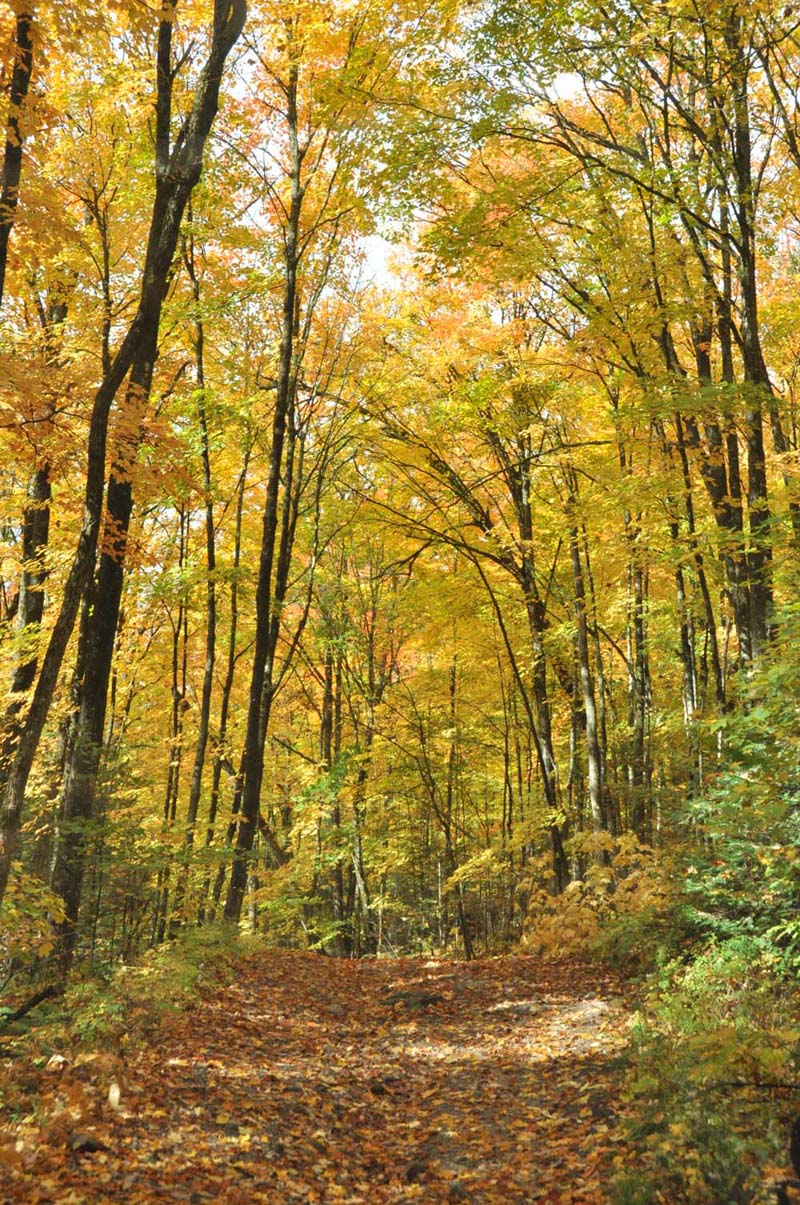 This is the road into the workings. We drive past "Titanite Hill" right to the end of the drivable part of the road. Even then, several parts of it are four-wheel drive only. 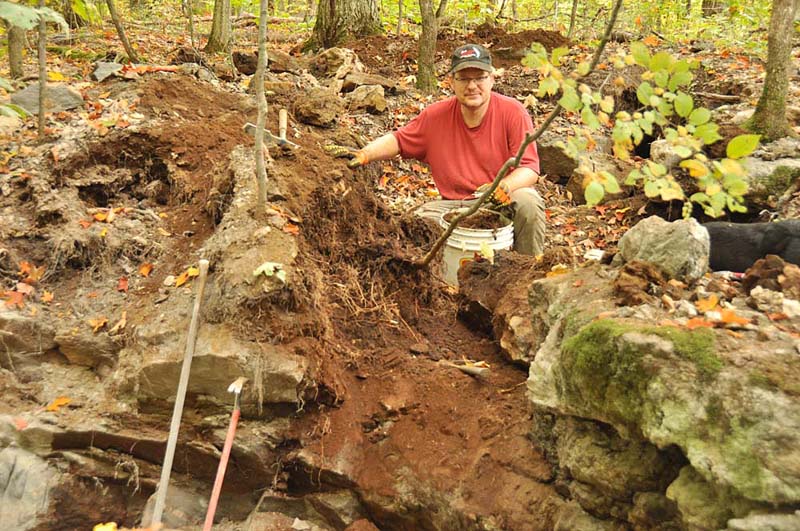 Here's a view of the Midway deposit just as we started grubbing off the topsoil to fully expose the rock that we had to crack, split and remove. That is Ray getting dirty. 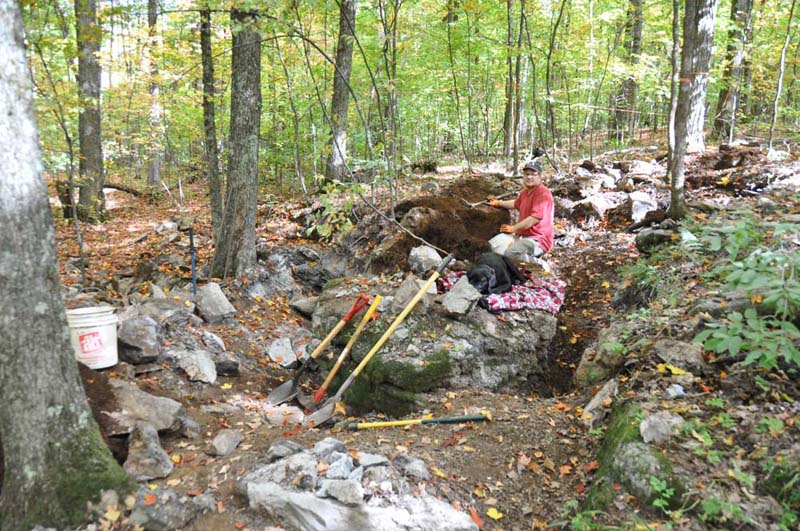 A greater overview of the Midway area just before the destruction began. 🙂 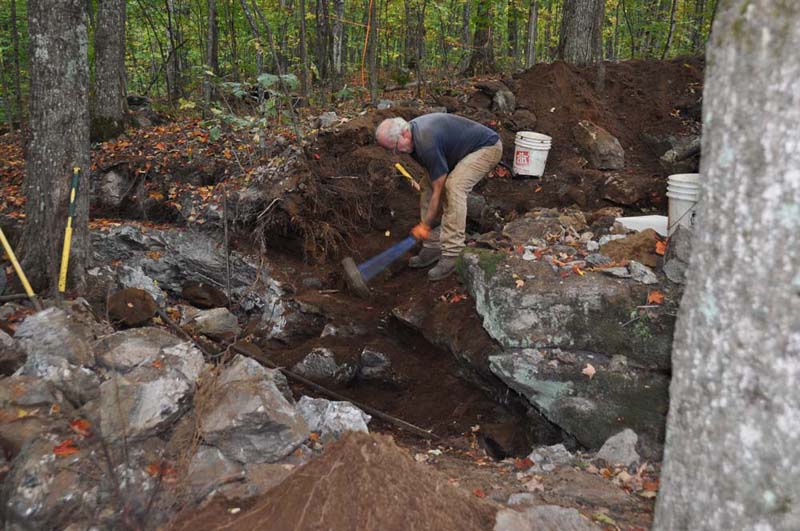 We all worked hard but generally, it is accepted that George is at his best when he is reducing outcrops to rubble with a 16 pound sledge hammer and car springs. He uses portions of very tapered car springs that have been sharpened with a gradual taper at one end. He taps the springs into the thinnest of cracks and pounds on them with a crack hammer or a big sledge and before you know it, the thin cracks are wide cracks and that portion of the outcrop surrenders. Here he is pounding from a fairly awkward stance on springs in an horizonal crack. With any luck, there is a crystal pocket or seam behind the rocks that are removed. We never know what might be there!! 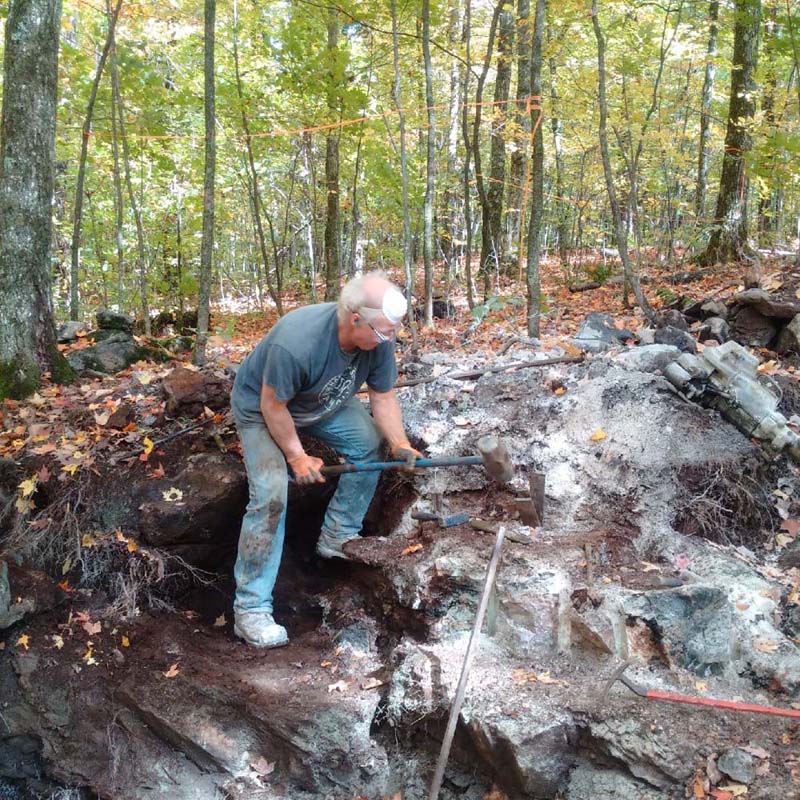 Here George is pounding on two car springs in a near vertical crack. 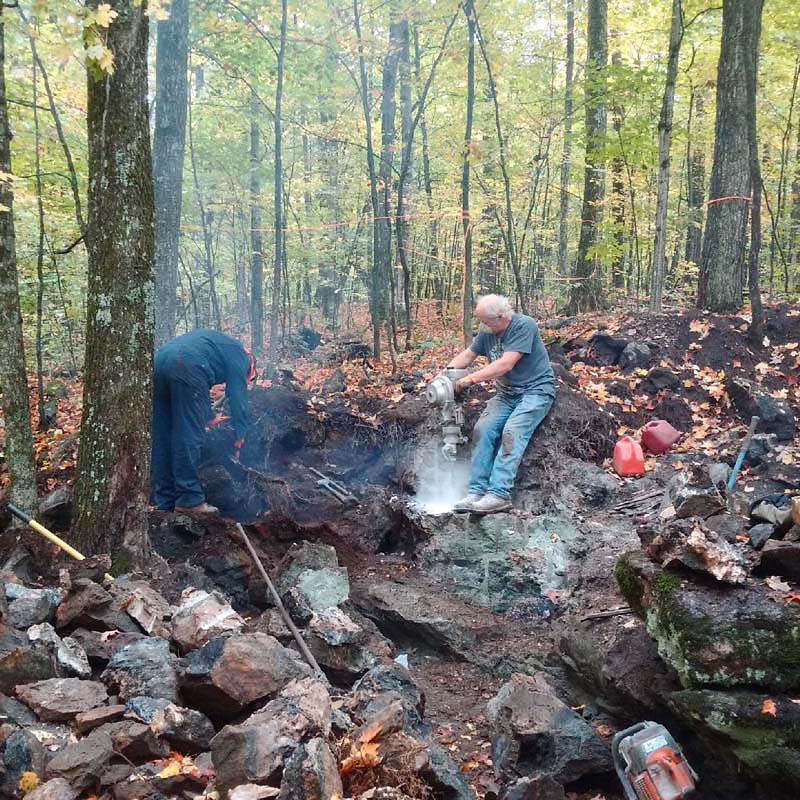 We also make our own crack, employing feathers and wedges inserted into drill holes drilled with George's Cobra drill or my Pionjar. The holes are drilled just the right distance apart for the type of rock. 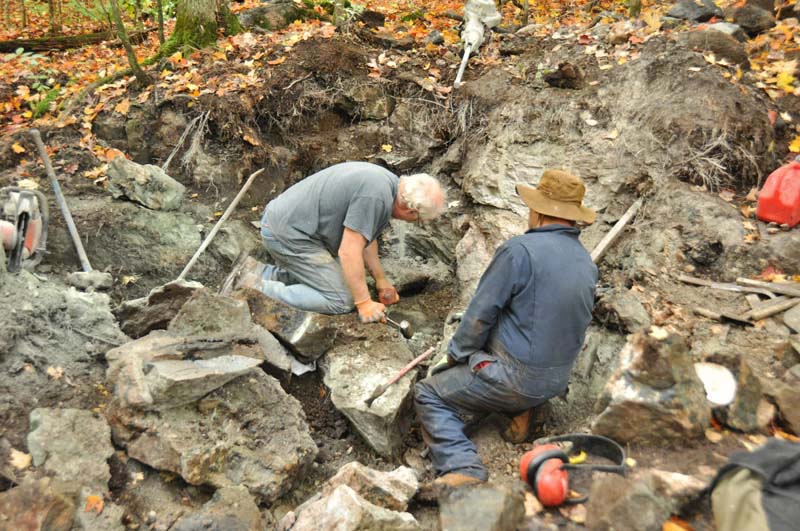 Here George and Ray use chiseling techniques to loosen some stubborn rock. Note the growing pile of broken rock beside the workings to the left side. 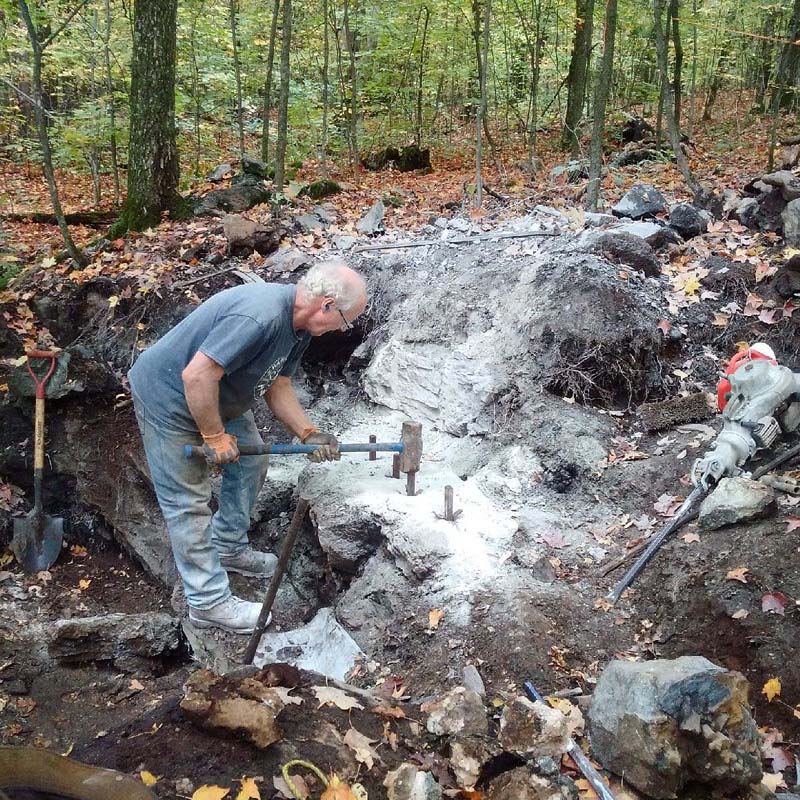 Here is the row of holes that George drilled earlier, fitted with, first, two "feathers" and then one wedge between the feathers. As we pound on the wedges, lateral tensile stresses are set up in the rock, which eventually results in a crack between the holes. Rock is much weaker under tensile stress than compressive stress. You can do some impressive work with these ancient tools! 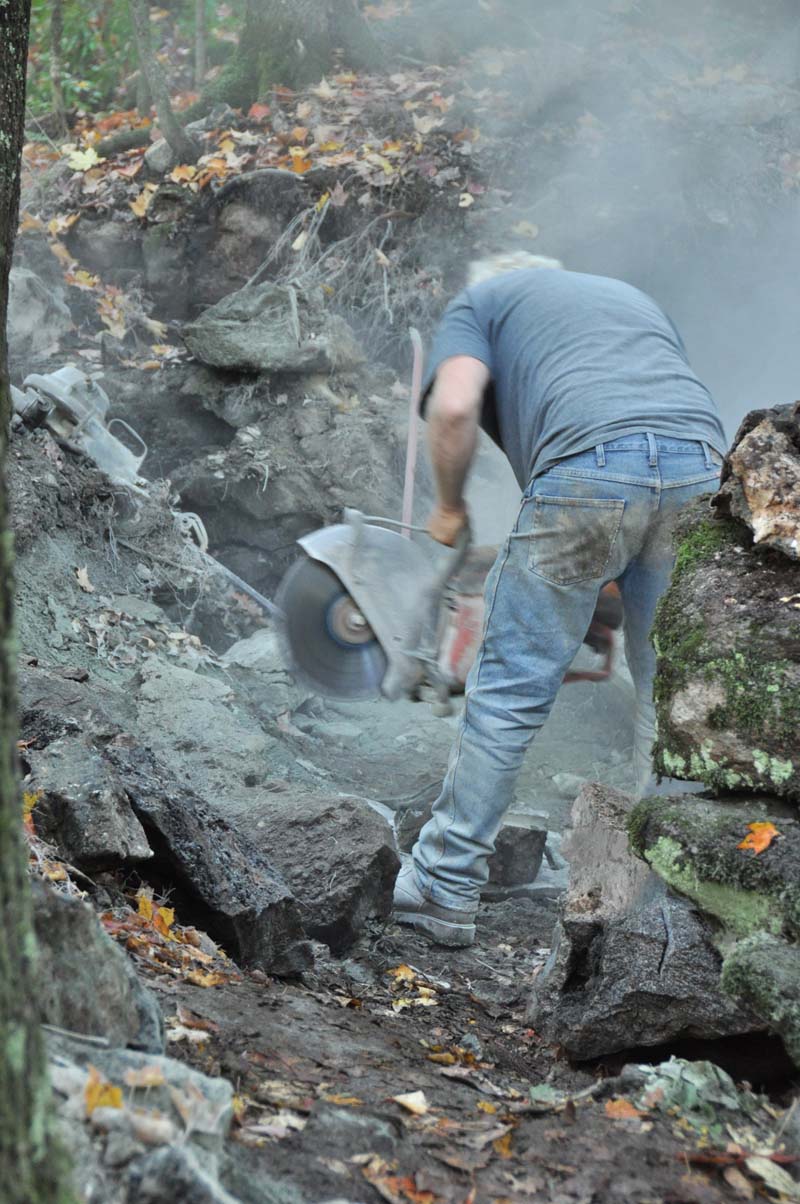 We also use a gasoline powered diamond-bladed saw to free up crystals from larger, tough pieces of rock. If we try to trim the specimens wit ha hammer and chisel, invariably, a high proportion of the crystals are damaged. Thus the saw technique! 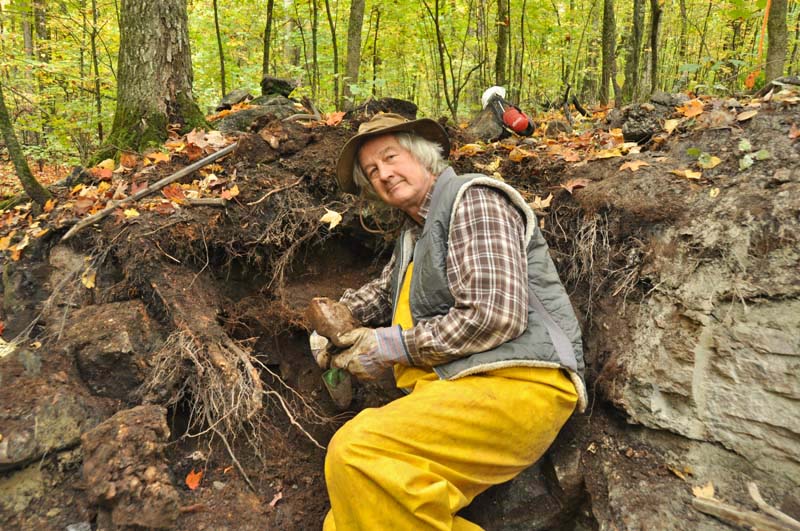 While grubbing dirt overburden off of the top of the outcrop, I found a good sized pocket of crystals, including this very nice, large microcline crystal. There is a better photo of the crystal on the next page of this photo-essay. 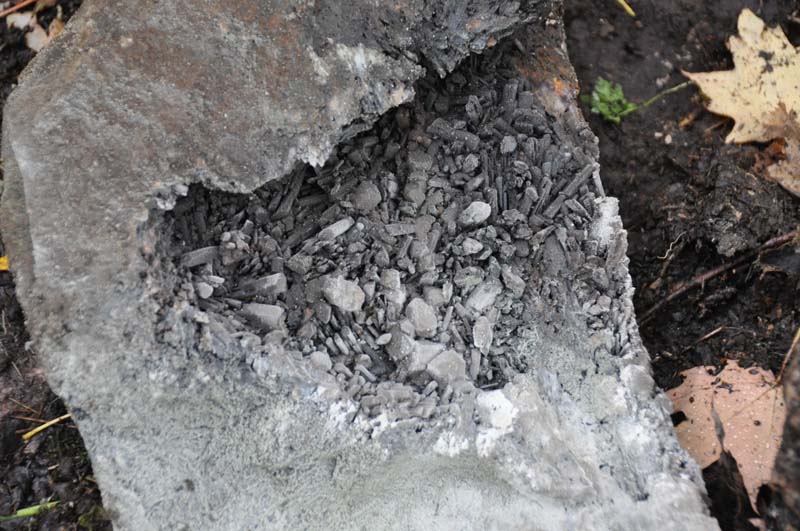 Here is a large pocket of fluoro-richterite crystals that we pulled out. We had to trim off much of the rock with the diamond saw to make it a manageable size. the pocket is about 30cm across. 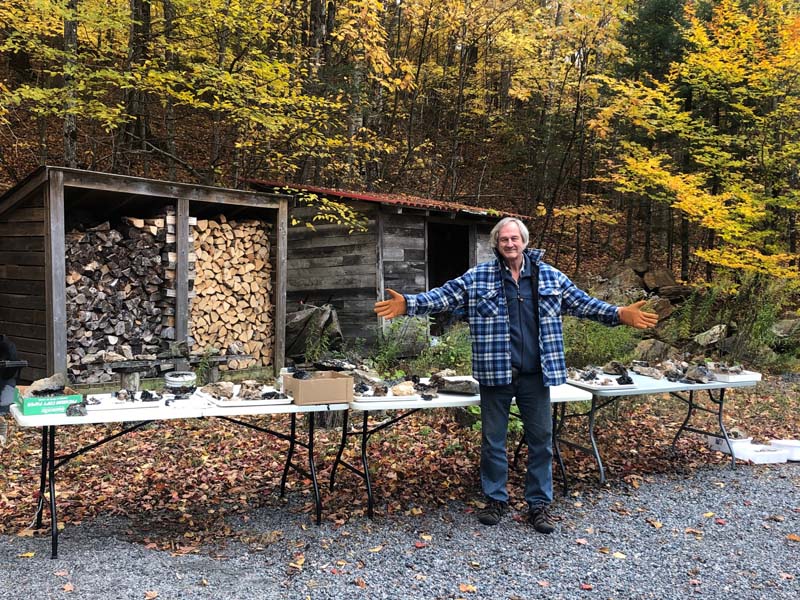 We all took specimens away for trimming and cleaning and returned to Bancroft for "the split". The drawing of cards determined the order of choosing! Here I am in front of the "picking table" holding all of the specimens that we felt were worth picking 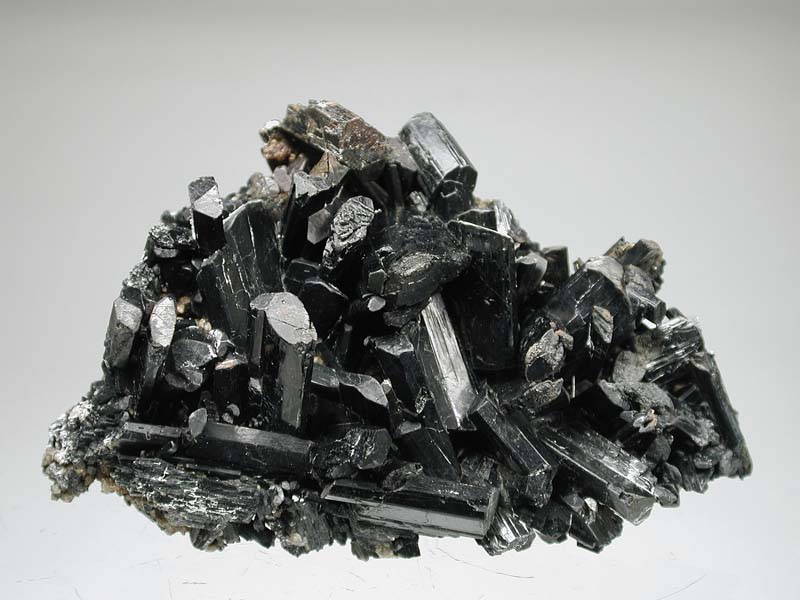 Here is a nice cluster of fluoro-richterite crystals about 9.0cm across. 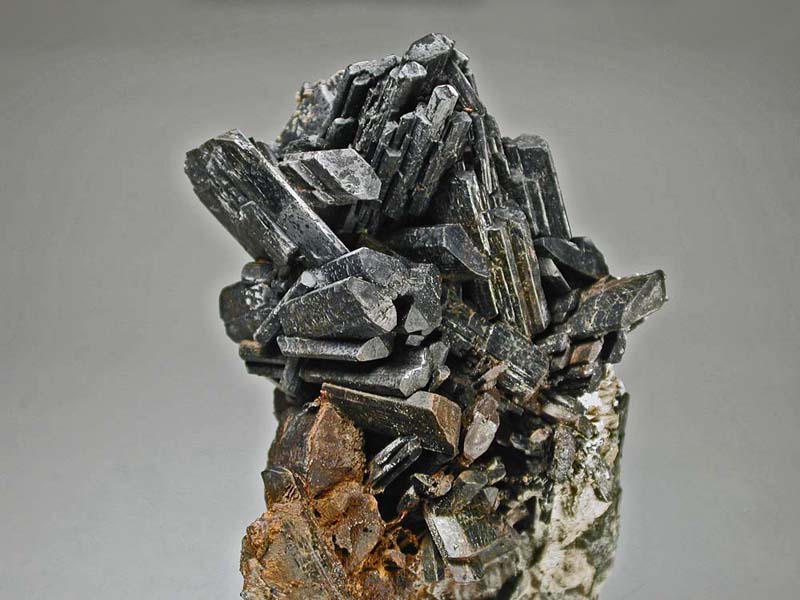 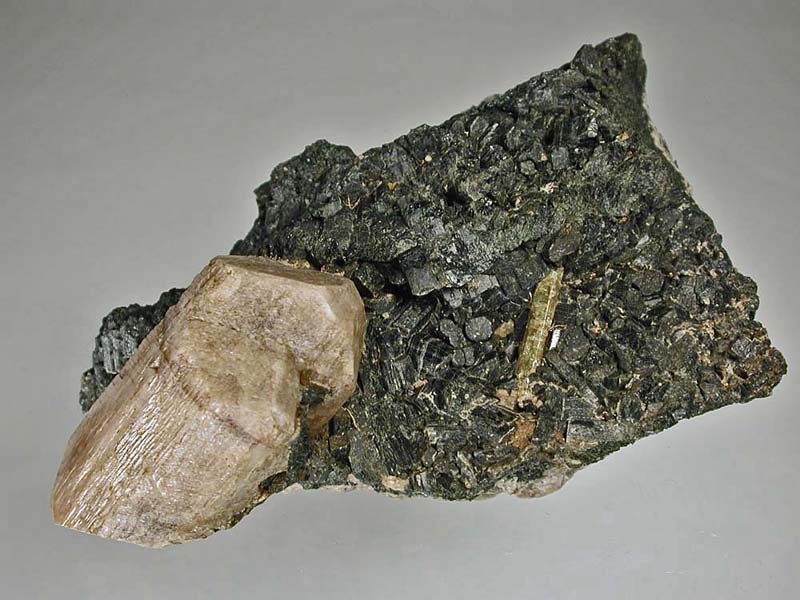 Here is a combination plate of a microcline crystal and one green fluorapatite crystal on augite. 14.0cm across 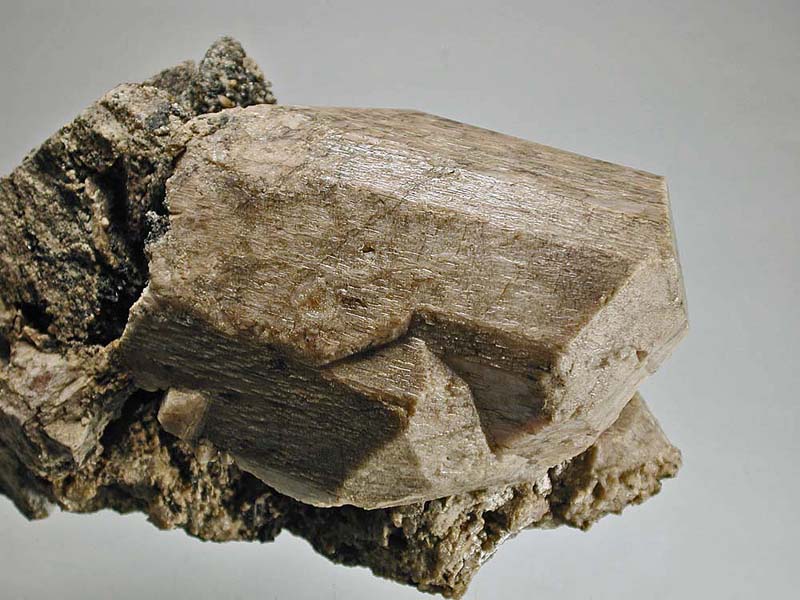 Here is the microcline crystal that I was holding in my hand in a previous photo. The crystal is 12.0cm long. Pretty good! 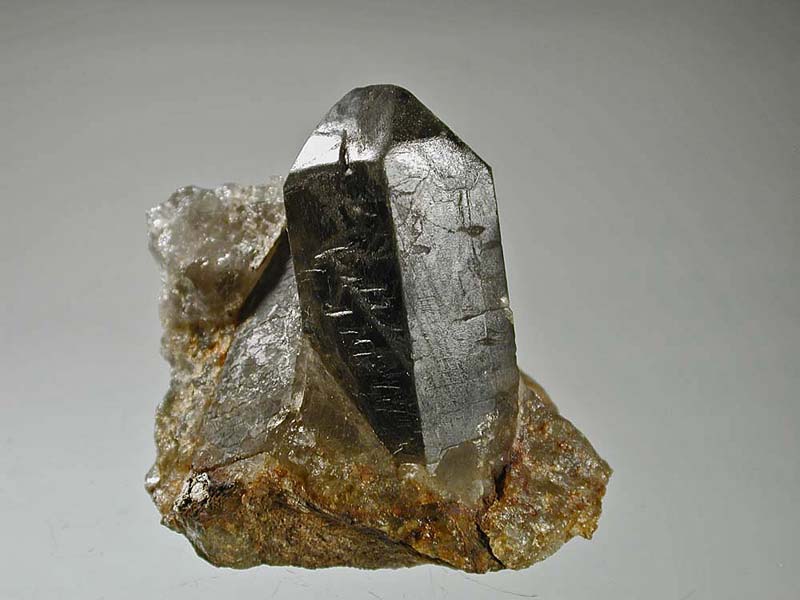 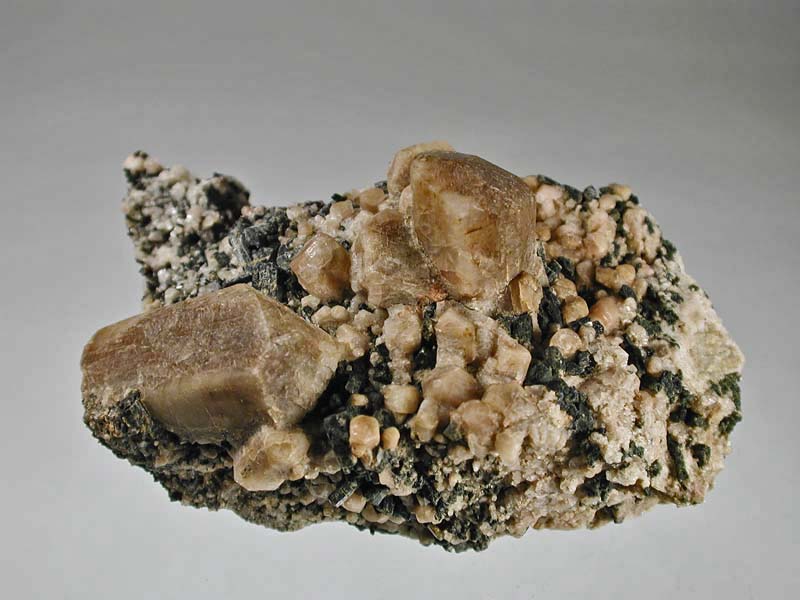 A plate of microcline crystals that is 11.0 cm across 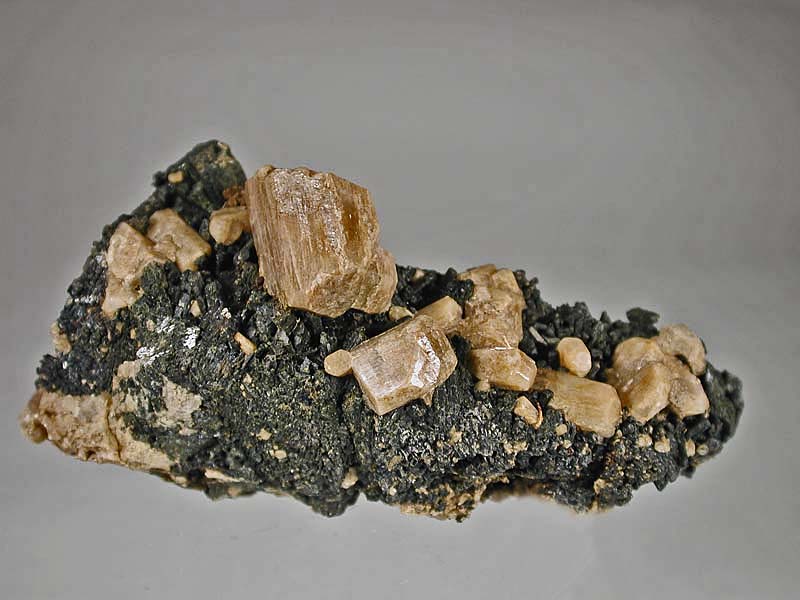 This specimen of microcline crystals on augite is 9.0cm across. 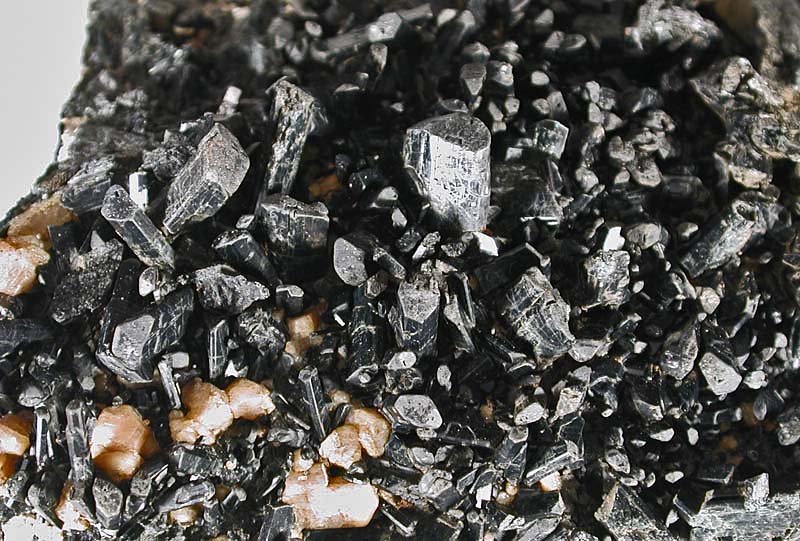 The view of crystals on this plate of fluoro-richterite and microcline is about 19.0cm across. 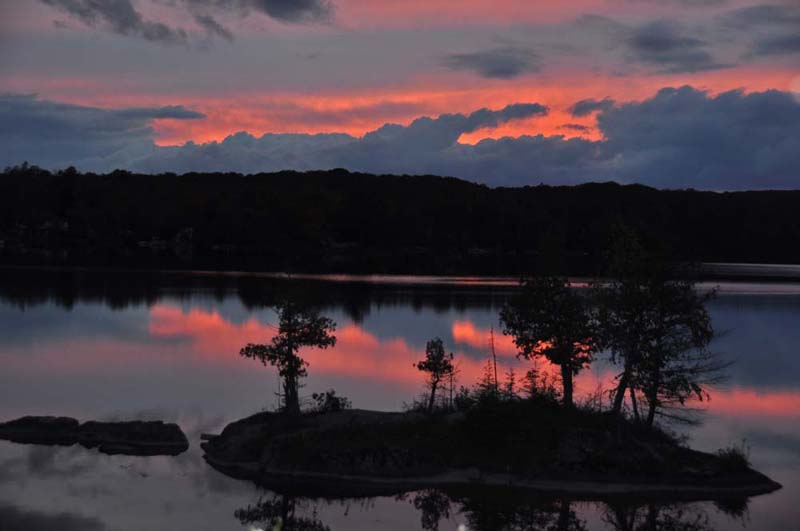 I'll close with this photo of a sunset view over a lake near Bancroft. It was a great week of collecting with some very nice specimen, great environment and time with friends.