The Walker Mineralogical Club, of which I am a member, is active in organizing field trips. One of the field trips this past year was to the Logan Cuts. Logan Cuts is the name given to a series of small open pit mines operated during the last part of the 19th and the beginning of the 20th centuries. Corundum-bearing rock was excavated for the corundum crystals that it contained which was extracted used for abrasives.

There were actually several corundum mining operations in the area, all related geologically. They include the Craigmont Mine( the biggest of them all) Burgess Mine and the Logan Cuts. These mines all exploited corundum rich rocks in the nepheline syenitebelt that is present in the area.Collecting

It is possible to find some fairly nice corundum crystals in the waste rock dumps beside the old cuts. They occur as phenocrysts in the nepheline syenite rock that hosts the deposits and as crystals in a more pegmatitic phase of the syenites. The phenocrysts tend to be rough, stubby crystals, difficult to extract as nice specimens. The crystals in the pegmatitic phase tend to be sharp, tapered, elongate crystals that separate from the matrix fairly well and can be very nice specimens.

The collecting technique at the Logan Cuts is to dig into piles of broken rock, wherever you can find it and, hopefully, find a boulder with a streak of the pegmatitic phase passing through it. Once found, the boulder must be broken carefully in order to expose corundum crystals and, hopefully, trim it down to a nice specimen, containing corundum crystal. This is easier said than done! The corundum crystals run higgeldy-piggeldy through the rock and it is impossible to gauge where an intact crystal might be, or how it is oriented inside a chunk of corundum-bearing rock. That said, once a crystal is exposed, the it is more likely to successfully trim the rock down to specimen size, particularly if you can use a hydraulic splitter or diamond-bladed saw.

There is lots of rock to look at and lots of corundum around. Good crystals are not so easy! I found lots of corundum bearing rock at the bottom of the hill, beside the road. It was not difficult to find crystals but they were mostly, the stubby habit of crystal intergrown with the other minerals. Later when I dug by the road near the top of the hill, near one of the cuts, I found a chunk of rock that had a pegmatitic phase that contained some of the sharper corundum crystals. I found only one but that occupied me for much of the time that I had left to collect. I broke it into manageable-sized pieces that I could take home for trimming afterwards. There was one obvious good specimen that could be potentially trimmed to size, at the time, plus some rock that held good potential

I always wanted to visit the Logan Cuts to collect and, hopefully, I'll go back some day to collect again. 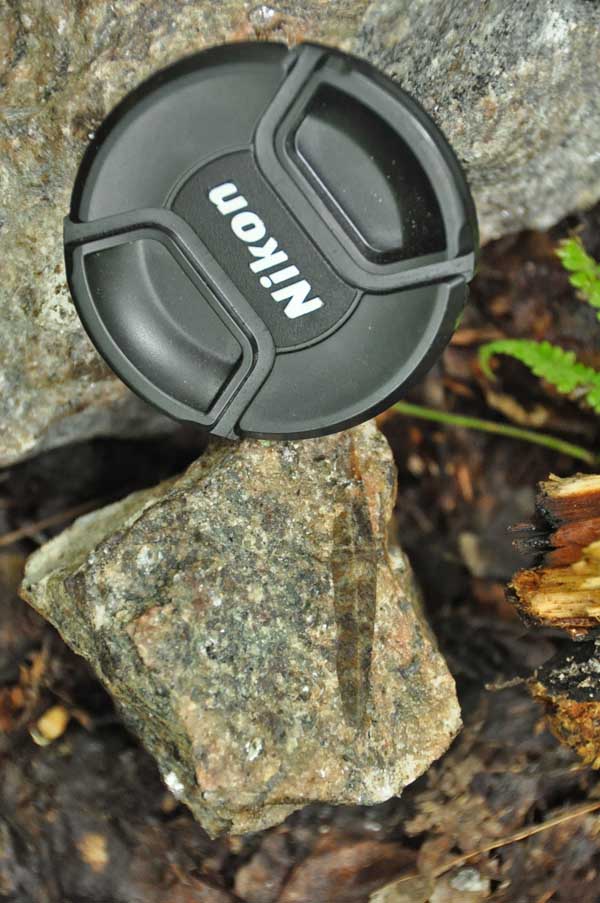 A nice specimen right out of the ground!
The corundum crystals in the more pegmatitic phase of the syenite are the best formed and are long tapering prisms like this one. 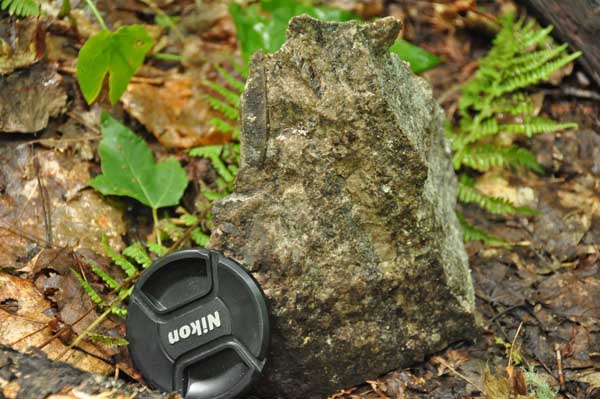 My best specimen of the trip before trimming
I broke up a fairly large boulder to expose this well formed crystal. It is missing a little of the termination but looks good. 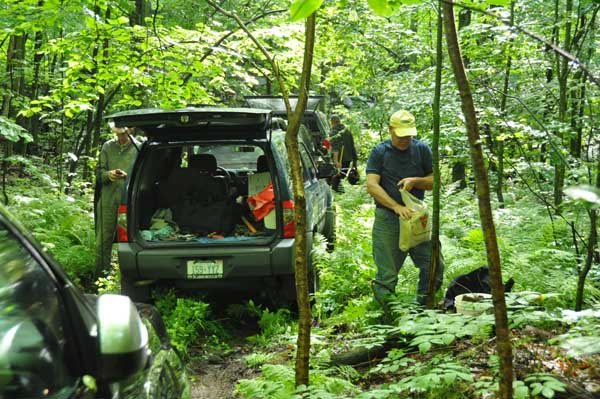 Dense Bush! Rough Road!
The old road into the Logan Cuts is just past the Burgess Cuts locality. It is about 1.5km long and VERY rough for a regular car. You really need a four-wheel drive vehicle to negotiate the road or hike in by foot. I'd like to say that you could take a helicopter inbut the bush is just too darn dense at this locality. If you have a four wheel drive, you can drive right to the dumps and open cuts. 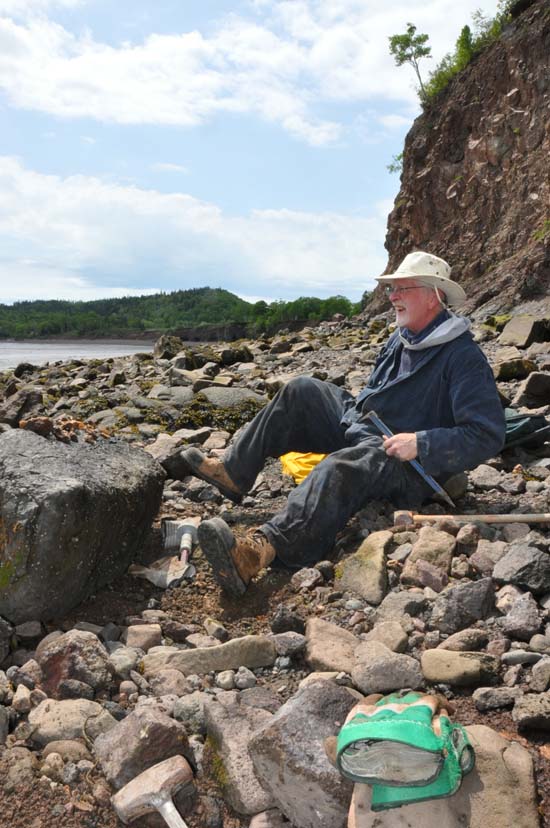 Jim Haase digging for Corundum
Like most old dumps in the Grenville, you just have to get past the roots and then pull out pieces of rock, hoping the old miners missed some good crystals long ago. Jim found what is probably the best specimen, a 12cm or so corundum crystal in matrix.

After trimming
Here is my best find of the trip after trimming. For information only. Not for sale.

One from my collection
I traded this specimen a couple of years ago. The crystal is 6.0cm in length. Sharp! For information only. Not for sale.

Loose Crystal
This corundum crystal from the Logan Cuts was a gift to me from Mike Irwin many years ago. He is the first person that I had heard of that actually went in to the locality. For information only. Not for sale.