Well this may not be a "recent" activity but since I have some decent photo's I thought I'd offer a glimpse into collecting at the former Bear Lake Diggings, a location that was a great place to find really good mineral specimens, until early 2016.

Please note that the land that envelopes the "Bear Lake Diggings" was recently sold by the Bancroft and District Chamber of Commerce and COLLECTING IS NO LONGER ALLOWED! IT IS NOW PRIVATE LAND. This is a real shame since generations of mineral collectors and interested people have visited the Bear Lake diggings over many decades to learn about mineralogy, geology and the collecting of the unusual and well crystallized minerals that occur there.

So this series of photographs and collecting tips are for the historical record, only, and can apply to any other calcite vein-dykes in the Grenville Geological Province.

The geological formations at the former Bear Lake Diggings consist of a series of weathered calcite vein dykes where the calcite has been eroded away by natural acids in the soil. This has resulted in the volume formerly occupied by calcite being filled, now with dirt, loam, dust, branches, glacial till, etc. Under the various debris that replaces the calcite are excellent crystals of magnesiokatophorite, apatite, titanite, mica and feldspar. Sometimes truly WORLD CLASS specimens of some of these minerals were found there. That is why my friend Ray McDougall and I went there a many years ago to work our butts off in the the woods! here are some photo's that will give you an insight into our efforts. 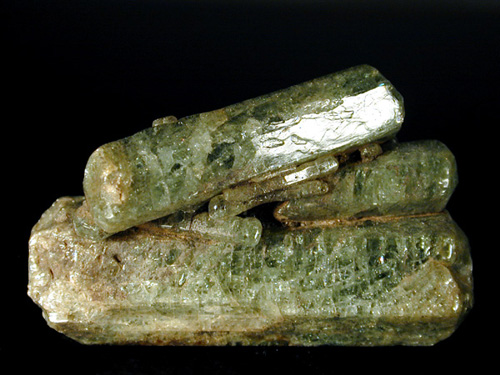 Fluorapatite
A superb fluorapatite specimen originally in the Mike Irwin collection. Although it is not large, just 8.0cm across, it is a very beautiful piece. apatite crystals at Bear Lake can often be 25cm or so long! For information only. Not for sale. 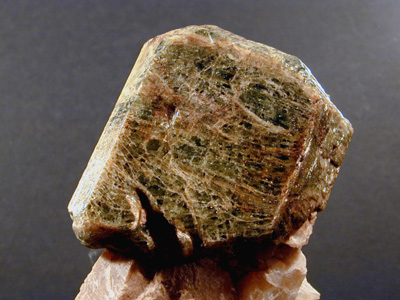 Fluorapatite
This specimen was collected off of the solid calcite in a calcite vein-dike years ago by Mike Irwin, the well-know Grenville mineral collector. Nice to see a specimen with calcite attached -not a common sight. The apatite crystal is 8.0cmx7.5cm. For information only. Not for sale. 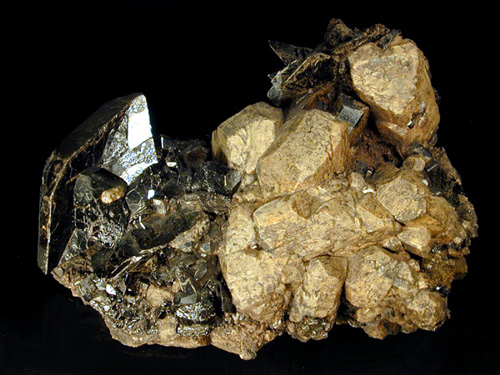 Titanite, Feldspar
This is a superb specimen of titanite on feldspar with a little apatite, collect at the Diggings about 12 years ago -not by me. I purchased it from Harry Ablett, a local mineral dealer at the time, just after the find. Note the wonderful twin on the left side of the specimen. The specimen is about 21cm across and the twin is 9cm across. Awesome!! For information only. Not for sale. 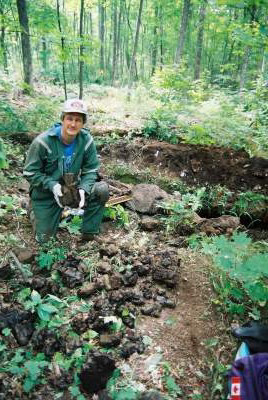 Large amphiboles, too!
One of the more common minerals at the Bear Lake Diggings is magnesiokatophorite. Actually, it is fluor-magnesiokatophorite. Quite a mouthfull but the crystals here represent well the manner in which rock forming minerals form very large crystals in calcite vein-dykes. Unfortunately, although they looked GREAT when they were dirty, most of the magnesiokatophorite crystals were fairly badly etched and corroded. They were BIG, though. We left 95% of the specimens we collected behind for others to pick up. A month later, all of the specimens we left behind were gone! 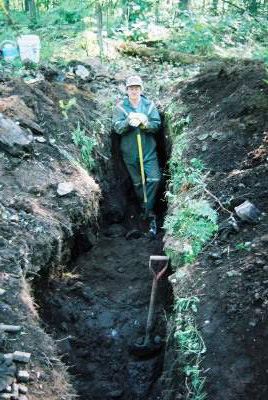 Man, we worked
We dug out a fair section of the vein dyke during four days of excavating. It is all a blur now but I do remember that we were pretty tired and sore at the end of each day. The water table, at that time was about a foot above the bottom of the trench that we dug, so we had to reach down into mud and water to retrieve many of the crystals. Then we had to fill in the dug out spot, to provide a dry place tio stand and dig along further horizontally and downwards to uncover more crystal-baring material at the very bottom of the trench. We enjoyed every minute of it. It is great to work your hands down into the material at the bottom of the trench and feel the crystals, then pull them out! 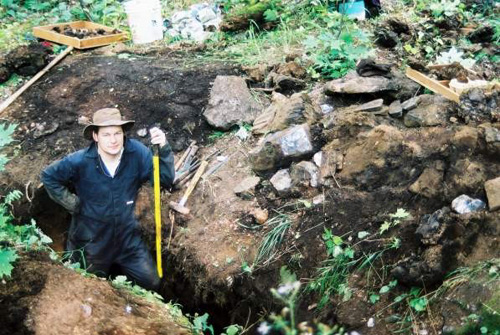 Ray, hard at work
Ray is a great person to collect with. He has an excellent instinct for interpreting geology and works like a trojan. Pretty good for a desk jockey! He knows the mineralogy and geology of the Bear Lake Diggings better than most, since he did some serious mineralogical work on specimens from the property during his days at McGill University in Montreal. He has collected some excellent specimens here over the years. 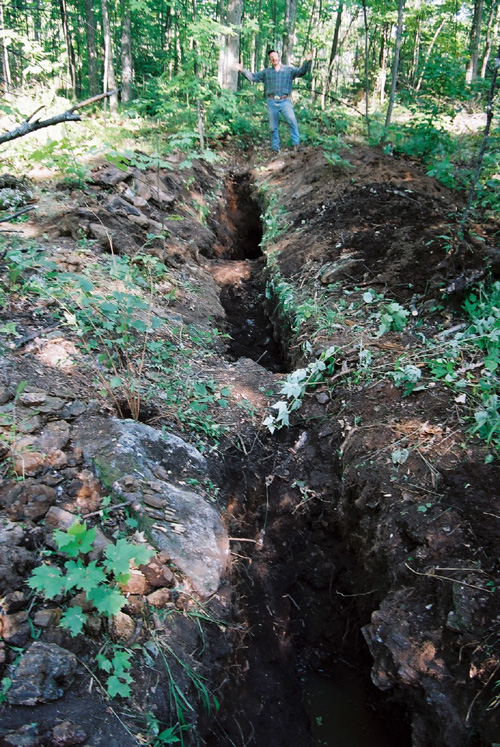 A lot of work
We accomplished a serious excavation during that week of work. A couple of months later is was full of water and has been, mostly, ever since! You can see where we piled up dirt and rock in a couple of places to provide spots where we could climb out of the trench. 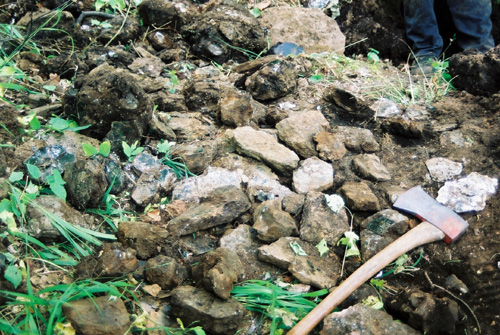 Loads of Mica
We found literally hundreds of biotite crystals, mostly rounded and of not much interest to us. They must have been of interest to others though. We left most of them behind and they were all gone a couple of weeks later. 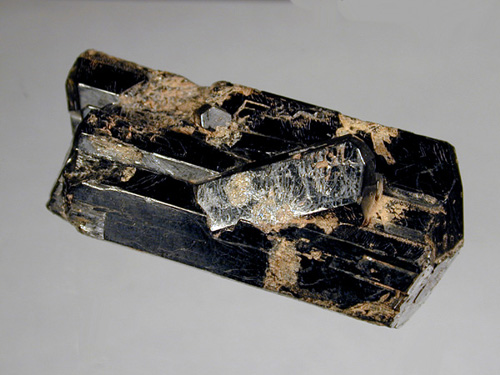 Magnesiokatophorite
We collected hundreds of specimens of this amphibole group mineral during this particular trip. We only removed perhaps a dozen specimens from the site since most were not nice enough for us. Some of the clusters weight 20kg or so! This is a well shaped specimen that shows some minor etching. It is a very nice twinned crystal that is 8.5cm long. For information only. Not for sale. 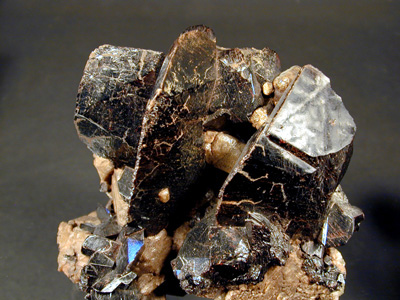 Titanite, Feldspar
Here is another excellent specimen of titanite on feldspar, also purchased from Harry Ablett, years ago. The cluster is 11.0cm across and 10.0cm high. The feldspar at the Bear Lake Diggings is most often Orthoclase-Microcline, sometimes with an overgrowth of albite. For information only. Not for sale. 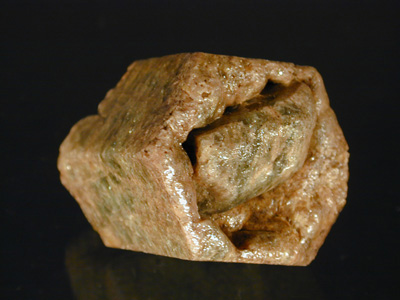 Fluorapatite
One of the more common well-crystallized minerals at the Bear Lake Diggings is fluorapatite, or apatite as we call it. It is pretty hard to visit the Diggings and not come away without at least ONE crystal. This one is interesting in that the termination is hollow and a second crystals grew or got stuck in the hollow! The bigger crystal is 4.5cm across. For information only. Not for sale.