Recently, I visited the BBC Mine, near Bouse, in La Paz County, Arizona. The BBC Mine is also called the BCC Mine and I've heard both used regularly. The goal was to find some good hematite crystals. I was introduced to the the locality a couple of years ago by my friend Paul Wray and was encouraged by the nice quality of hematite crystals we found in a relatively short period of time. The crystals were not stupendous but enough to make me want to go back and try a little harder! So Paul agreed to go back again. He has a great, roomy pick-up truck that has been on trips to many,many old mines over the years both in the Yukon, Canada and around Quartzite, where Paul lives during the winter. He and his wife Liz operated the Yukon Rock Shop near Whitehorse, Yukon, the rest of each year. Daniel Joyce and John Krenzel went with us this time.
The BBC Mine consists of a number of small underground and surface workings that was developed as a copper property years ago. I believe the idea was to mine coper rich mineralization and heap leach it to recover the copper. There was at least one small leach pad constructed, probably for metallurgical testing. It is a small leach pad and doesn't seem like it would be associated with an economic operation.
The BBC Mine mineralization is hosted by iron formation. The beds of hematite are laced with secondary copper mineralization on surface and, I expect sulphide mineralization at depth. It is easy to find malachite and chrysocolla all through the area. We were after nice hematite crystals but also found some very good goethite pseudomorphs after pyrite crystals that we were not expecting. 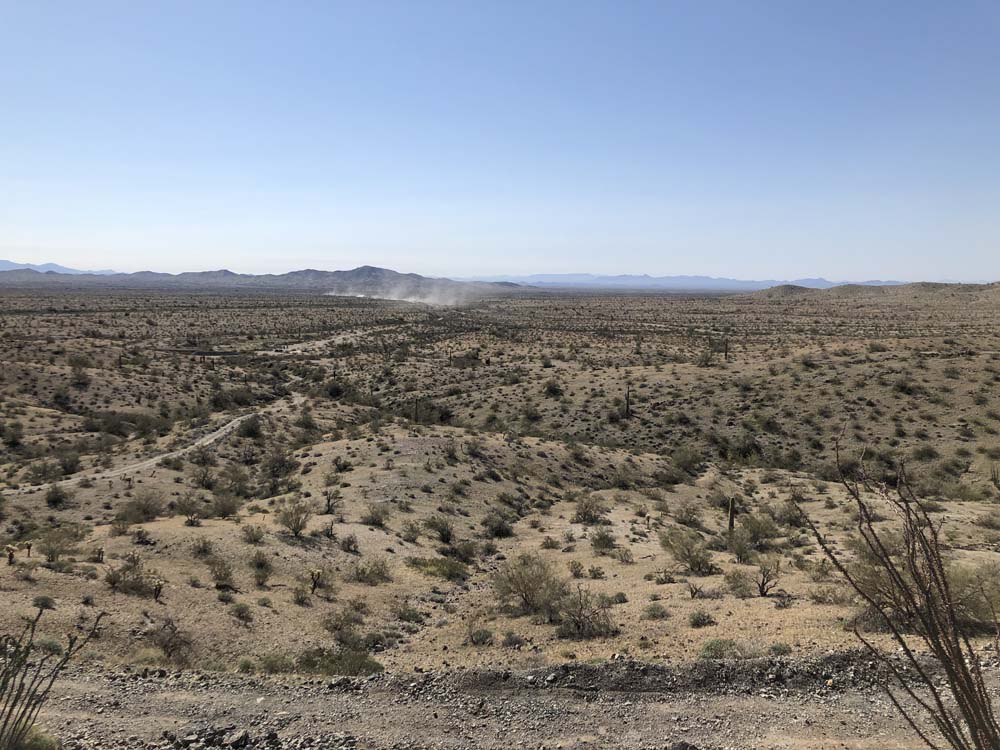 This is the view of the road to the BBC Mine, looking back towards Bouse, AZ. Rough road, mostly following washes. 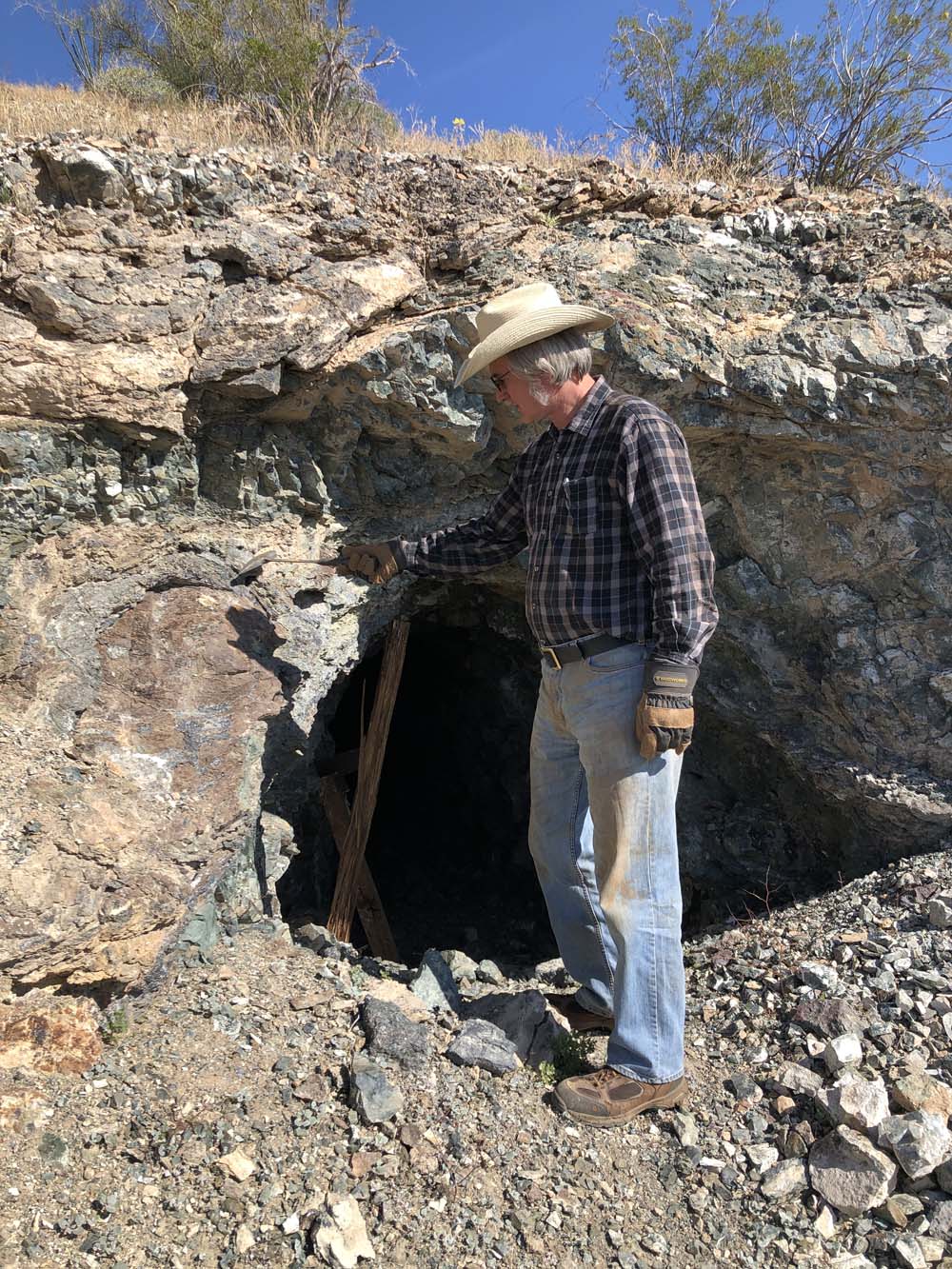 A pic of yours truly checking out an adit on the BBC claim. Didn't go in. I was looking at the surrounding rock which is largely iron formation laced with secondary copper mineralization. We didn't find much of interest here, other than very rich massive and veinlets of chrysocolla in hematite. Photo by D.D. Joyce 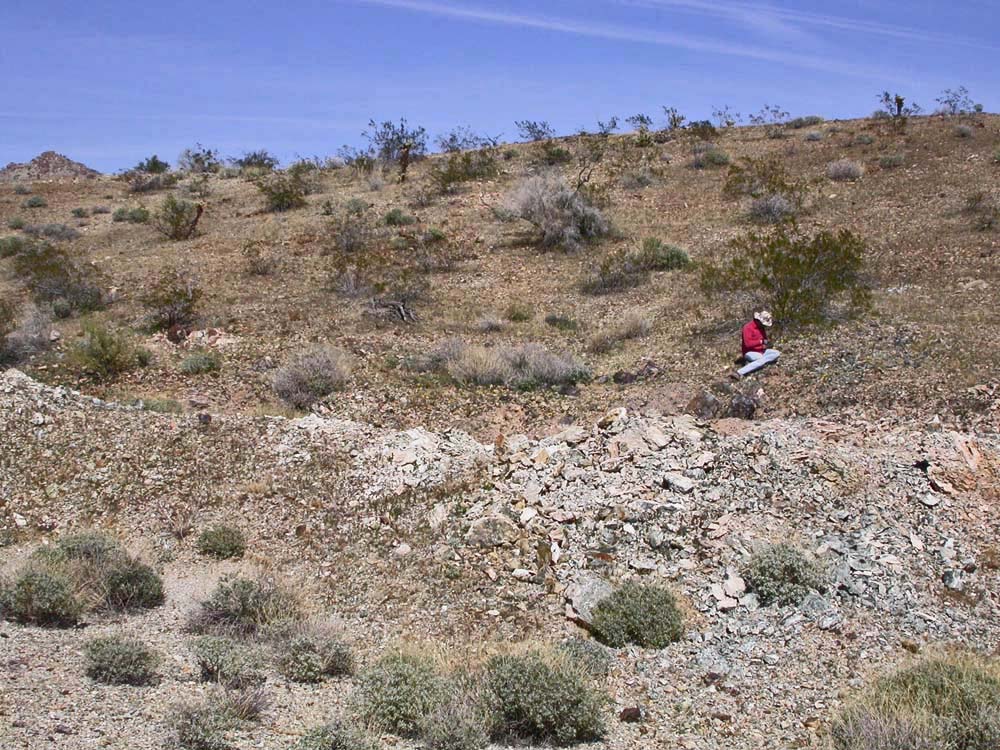 This is a view of the trench where we found the best crystals. Not much to look at but seems to be an excavation on a bedded iron formation. Not as much copper mineralization here but more open spaces with hematite and quartz crystals. We didn't do any heavy excavating but broke open boulders in and around the trench. That is Daniel, in the photo, checking things out. 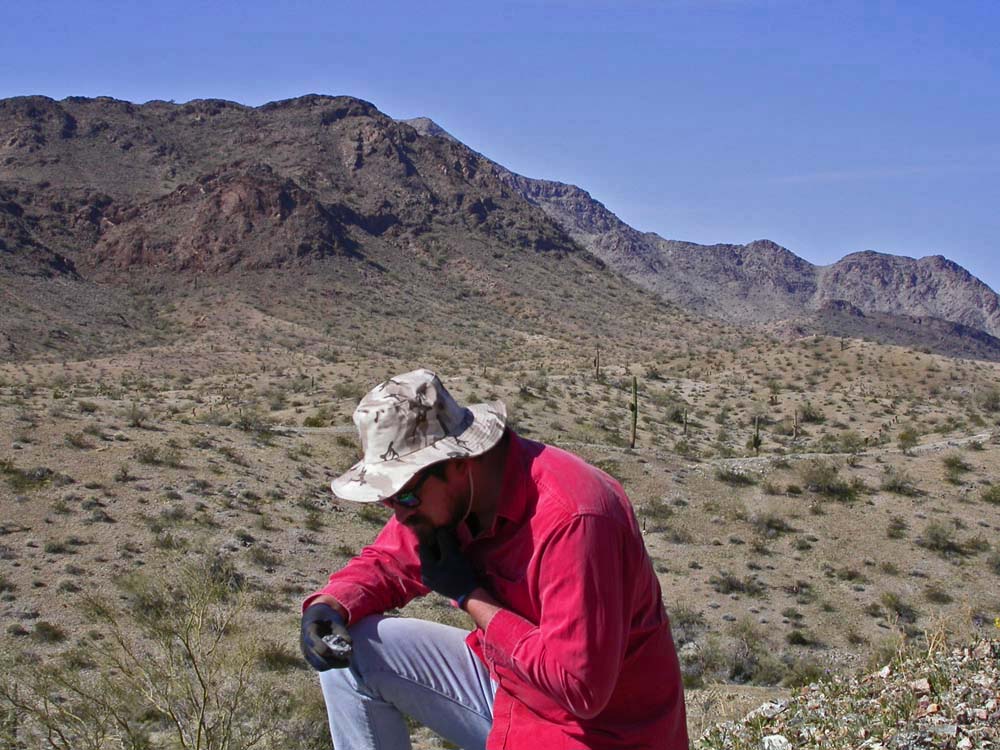 Daniel checking out the rocks, near the trench with fairly desolate desert in the background. 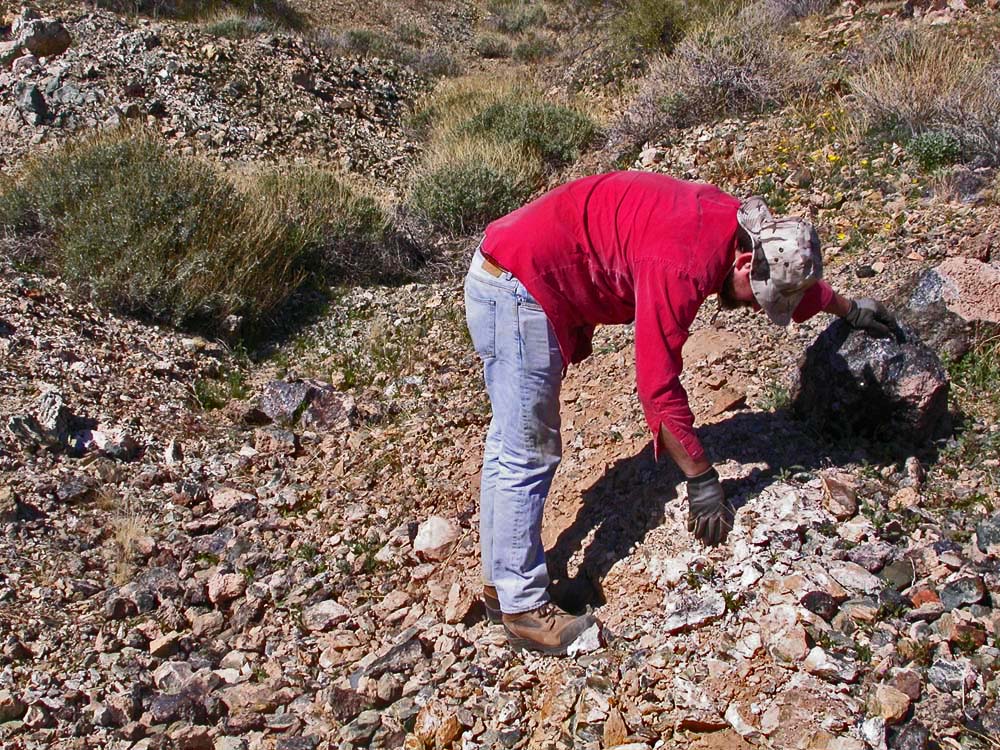 This is what the east side of the trench looked like. The idea was to see what we could find in surface material and possibly return at some future time for more serious digging in the actual deposit, if warranted. 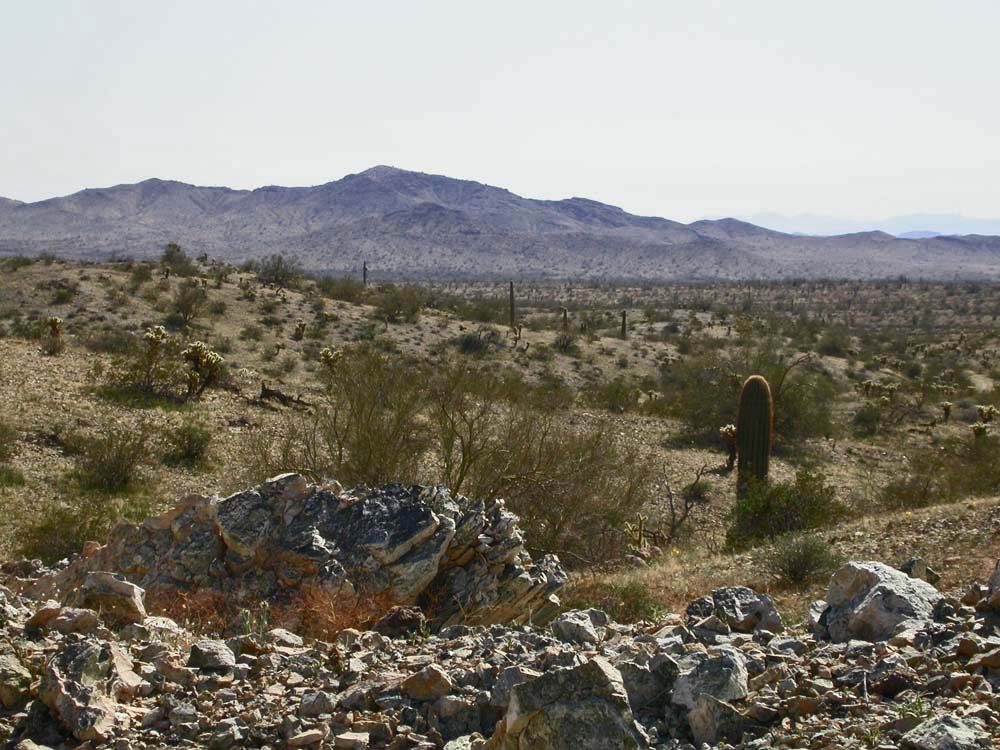 View from the adit area at BBC Mine. 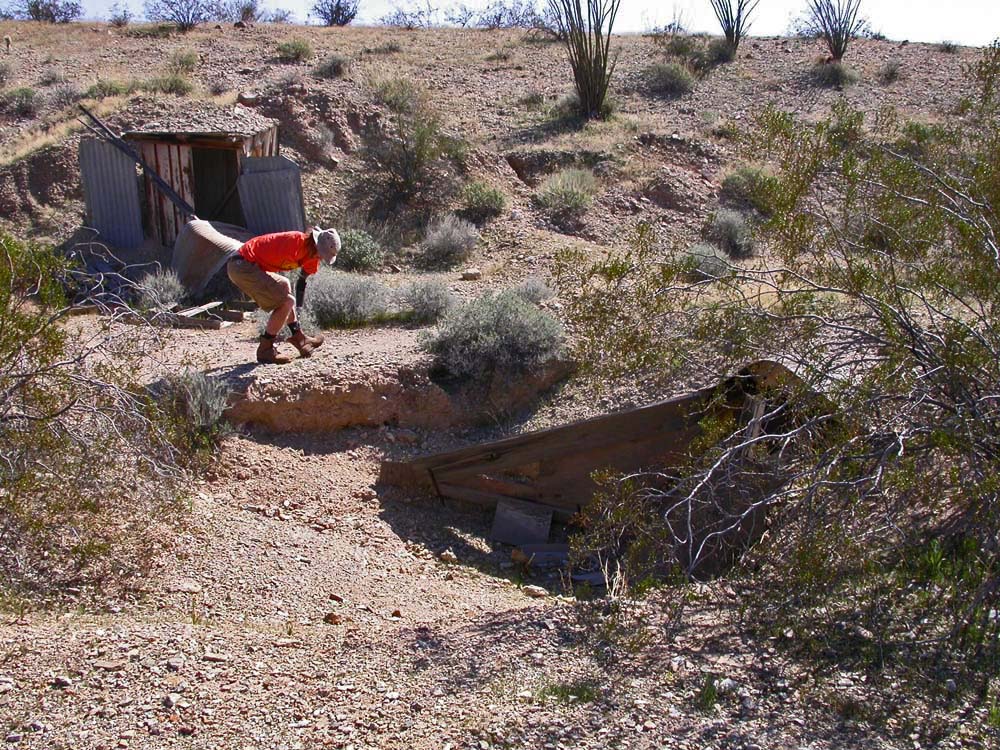 There are a couple of small buildings located a short distance from the workings. The one that is set in a dug-out area inthe ground looks like it was the explosives magazine and the other the blasting cap magazine. The powder mag is now filled with diamond drill cores in boxes. No particularly interesting core that we could see, though! 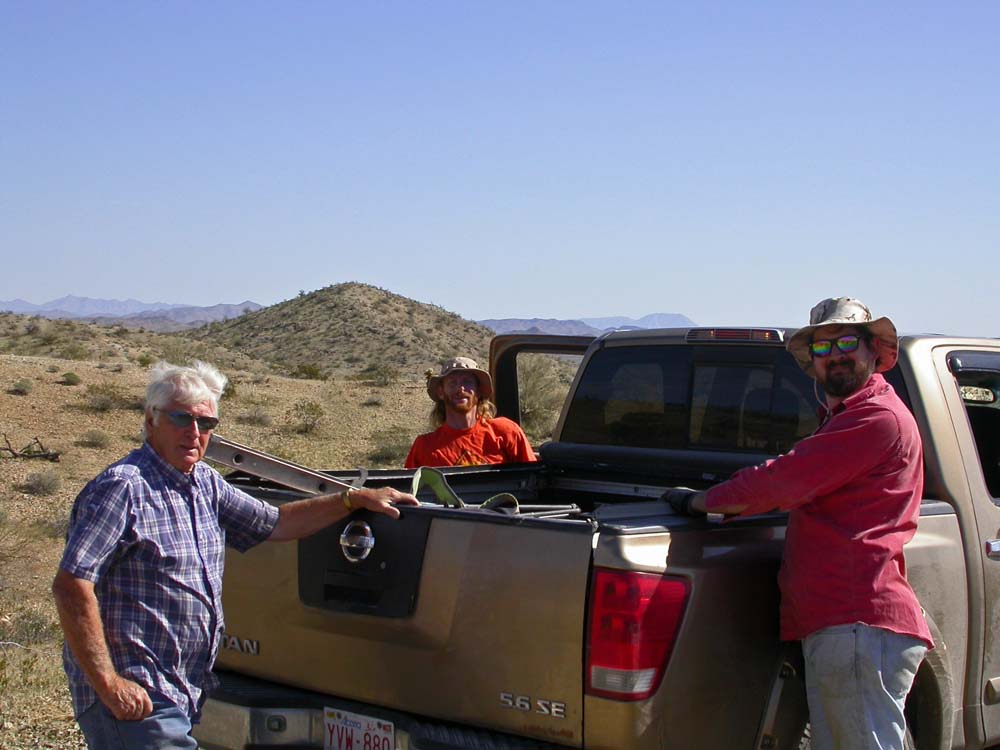 Here is the team; Paul, Steve and Daniel, gathered around Paul's truck just prior to leaving. 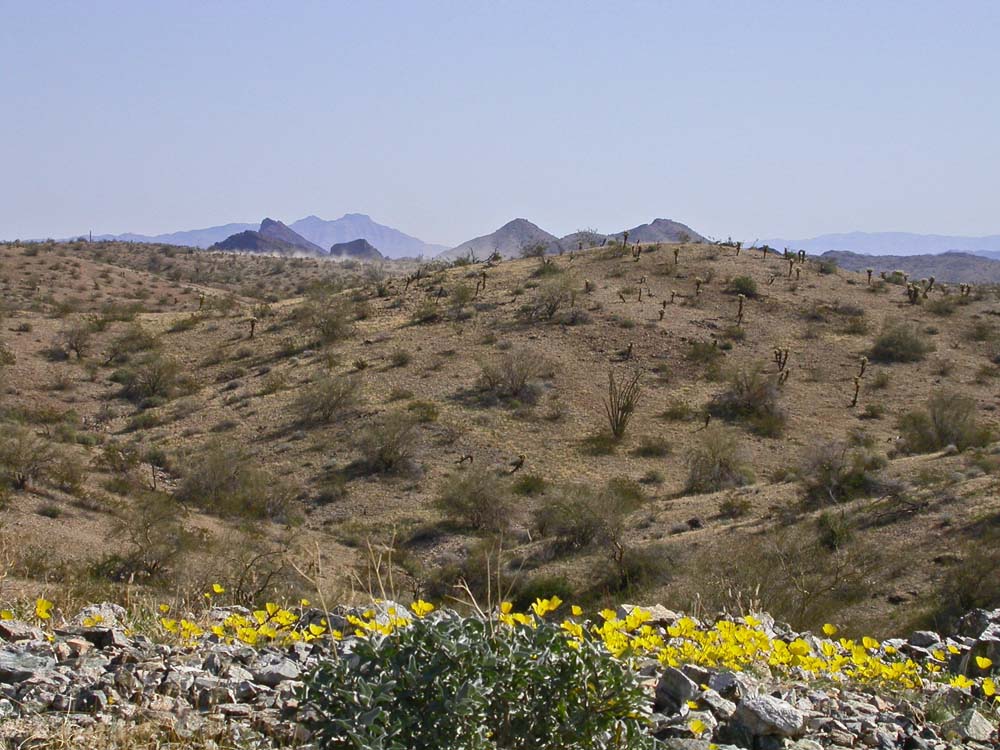 A particularly nice late winter view of the landscape from near the adit showing the beautiful "desert poppies" that start to bloom that time of year. 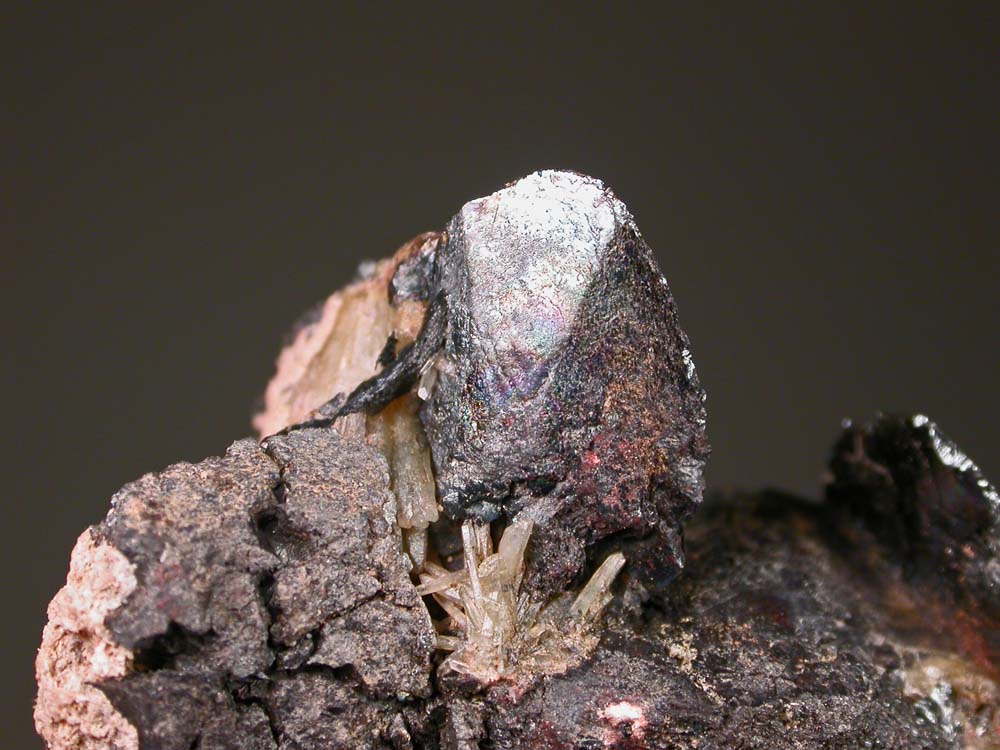 A 15mm hematite crystal on matrix associated with small quartz crystals. Individual hematite crystals can be nice here but I didn't find any "specimens" that stand-up as a display example. 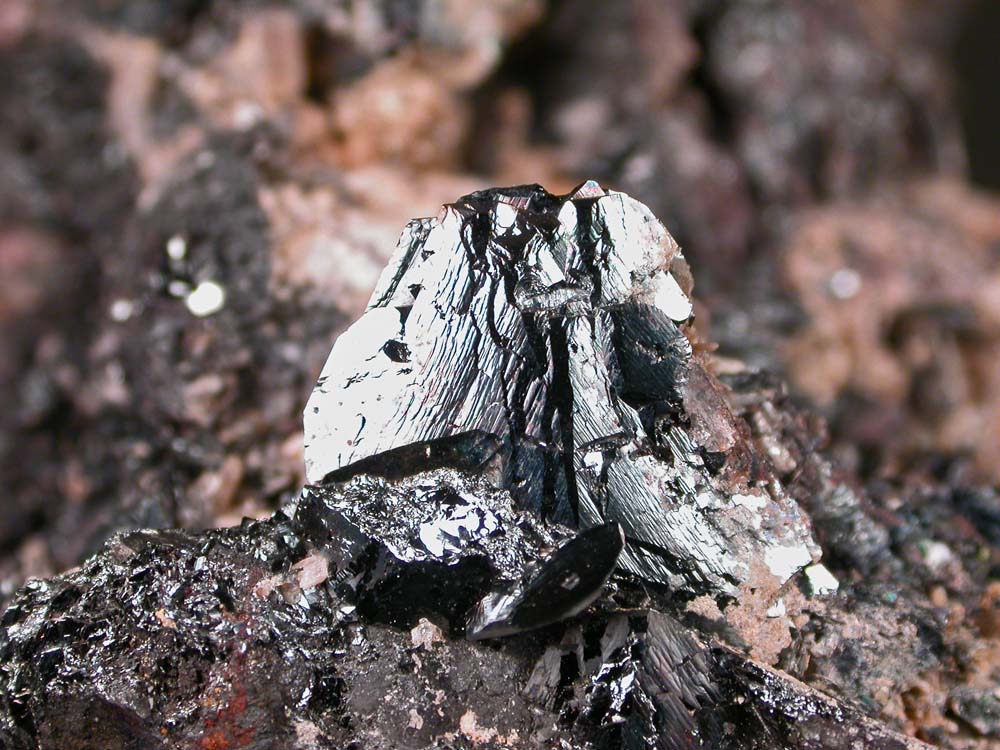 Another nice hematite crystal, 14mm tall, with brilliant luster. It is not damaged but is a sort of composite crystal with suturing and stepped growth. 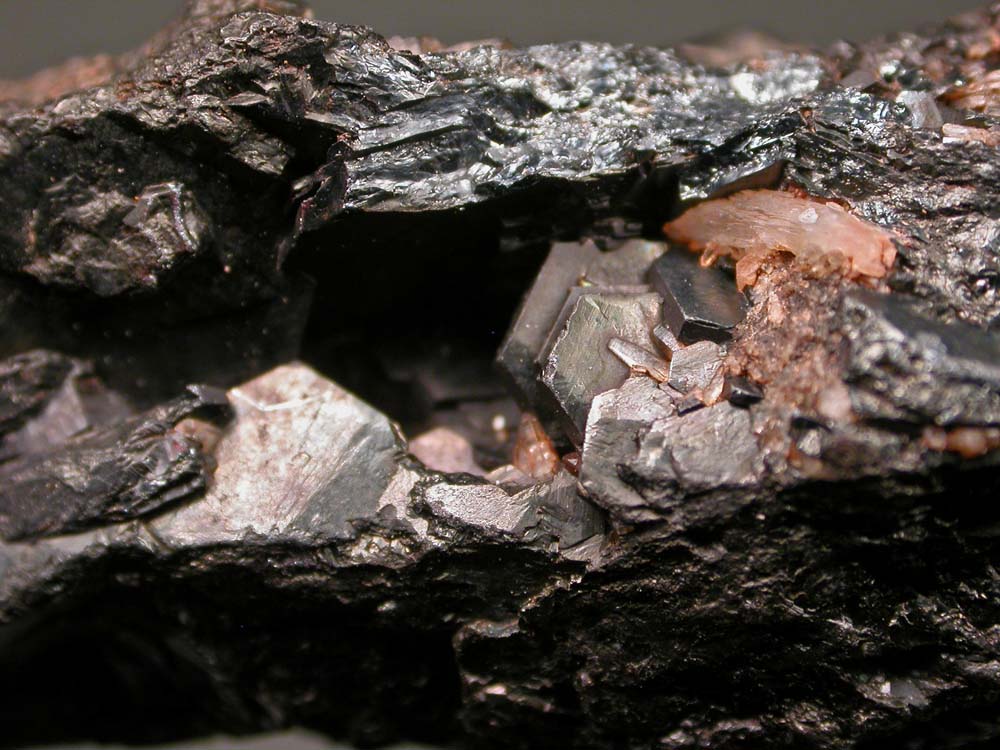 A nice 20mm vug of hexagonal hematite crystals in quartz-hematite matrix. Most of the crystals are encrusted with what I think is caliche and are actually difficult to expose, unless etched out of calcite or revealed in a closed cavity. 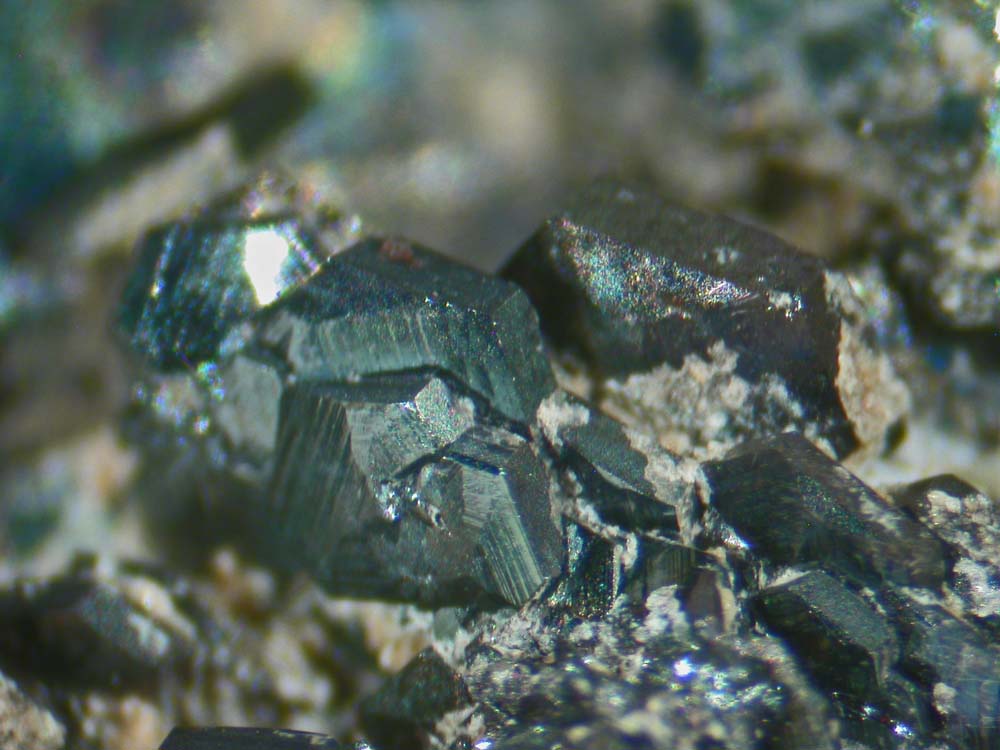 Some hematite crystals all about 4mm or so in size. 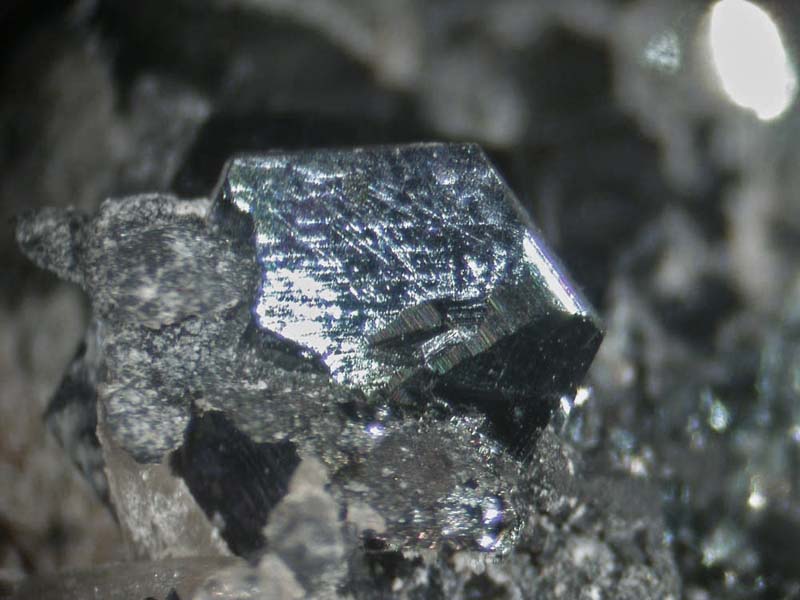 A sharp, hexagonal hematite crystal about 5mm across. 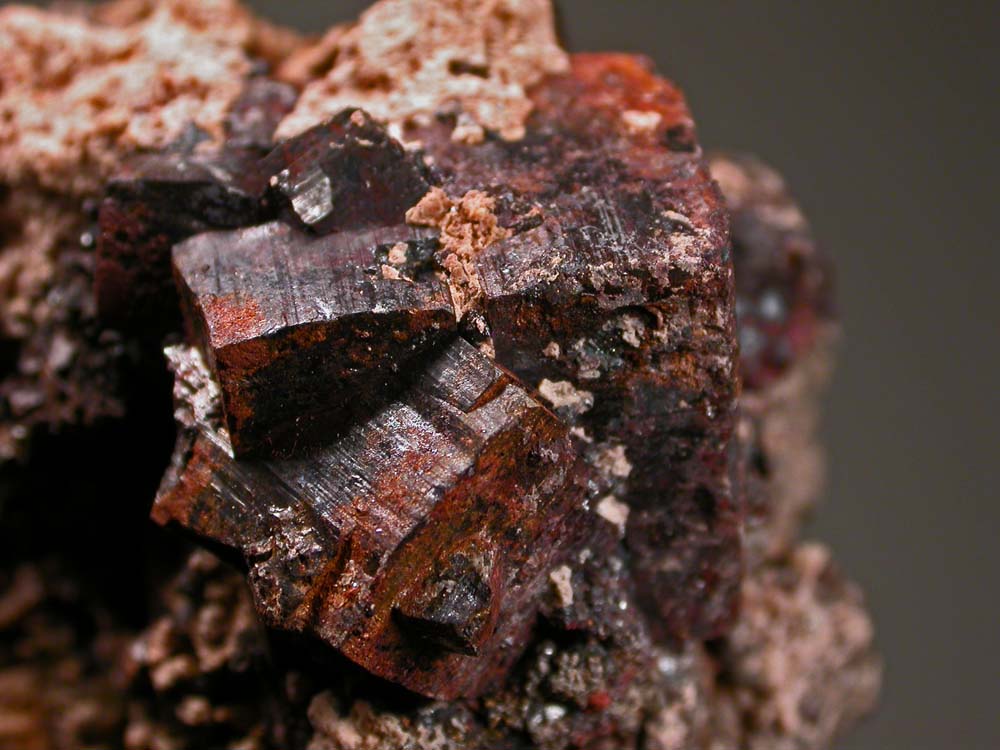 Here is the largest pseudomorph of goethite after pyrite that we found. The stria on the pyrite crystals is perfectly preserved. The largest crystal is 22mm on edge. 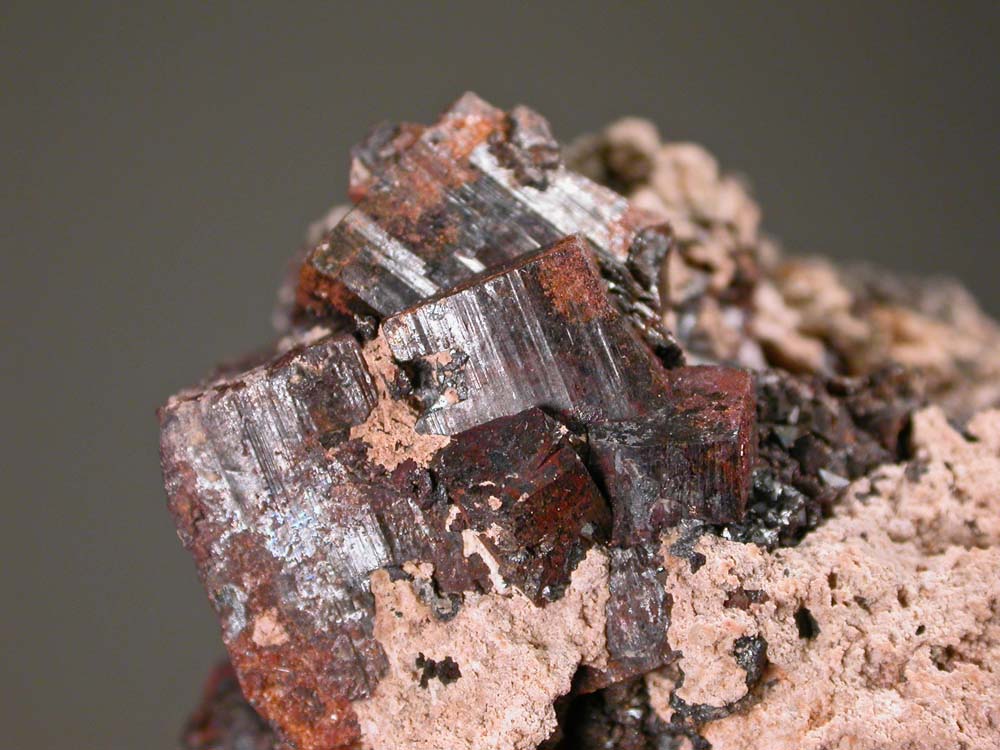 A different view of the pseudomorph in the previous picture. 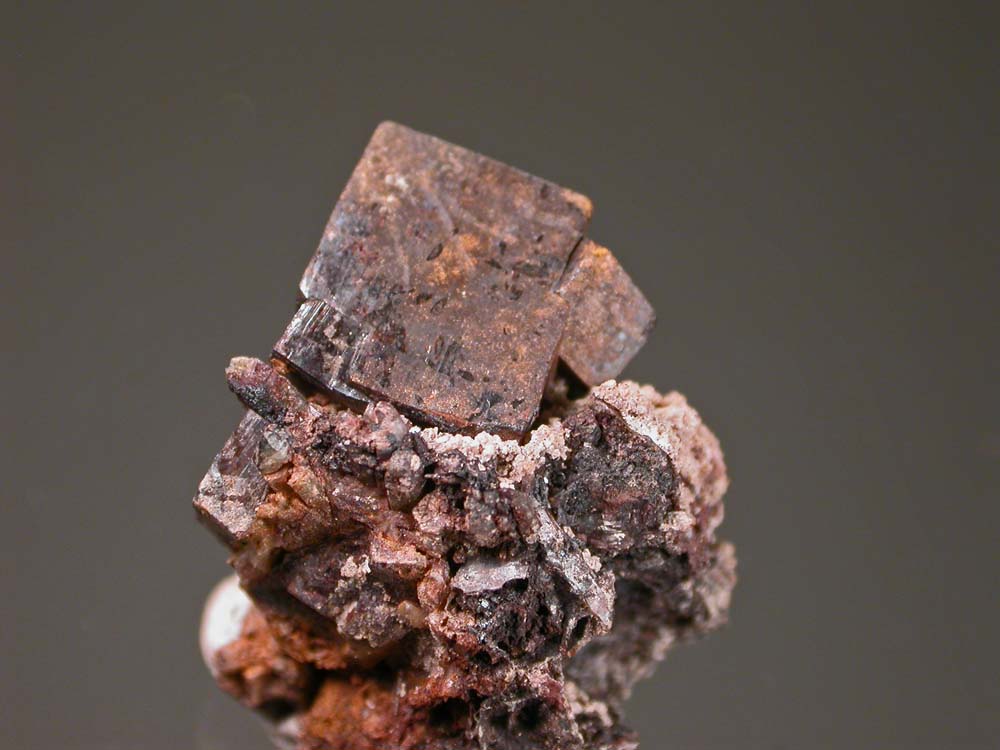 A couple of very nice, sharp pseudomorphs of goethite after pyrite crystals. The larger of the two is 9mm on edge and the field of view is about 30mm. My favourite of the pseudomorph specimens. 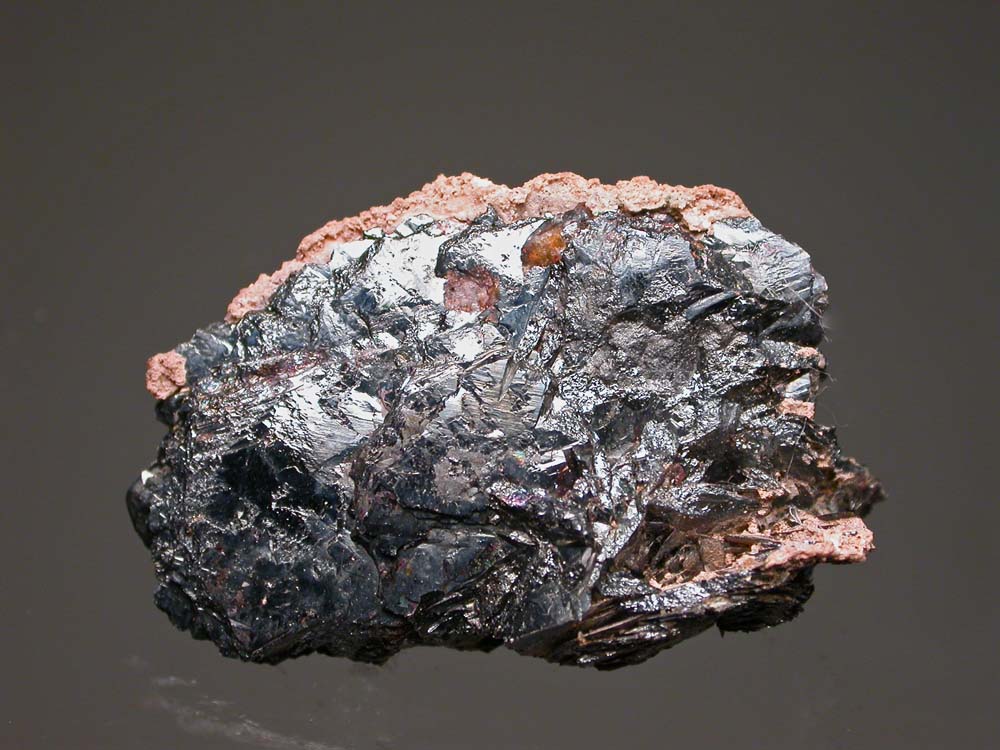 A large, individual hematite crystal. The large crystals are all sort of composite-mosaic with many growth features and very difficult to photograph. They look much better in your hand and turned to catch the light. This crystal is 39mm across. 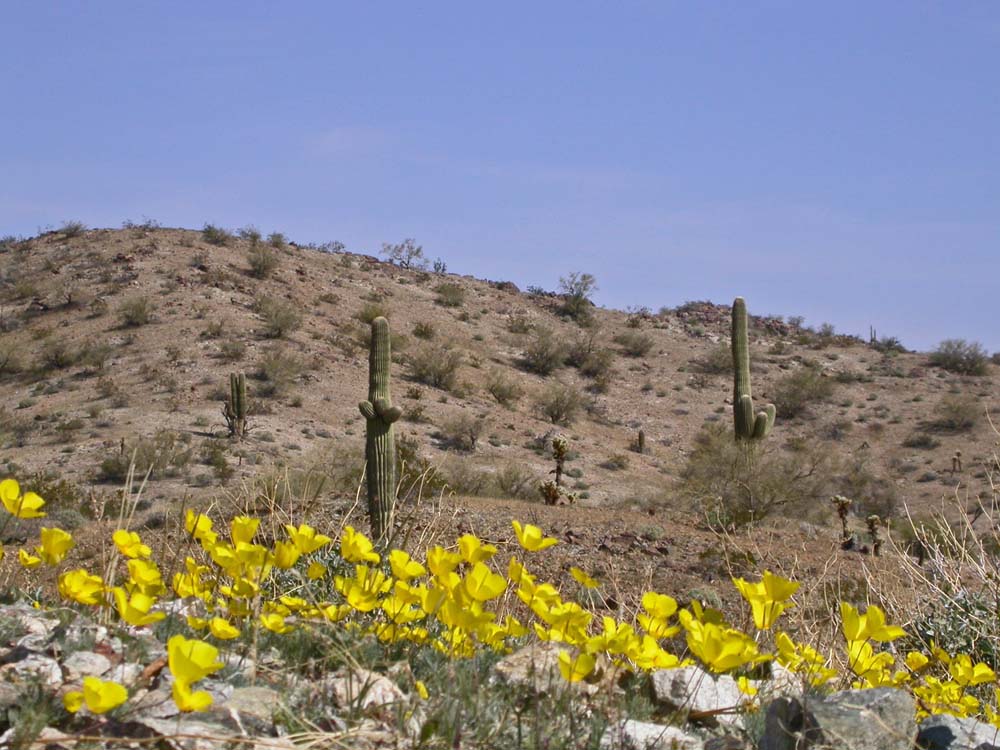 Before we leave the BBC Mine area, here is another desert view with the desert poppies and cacti in the background. 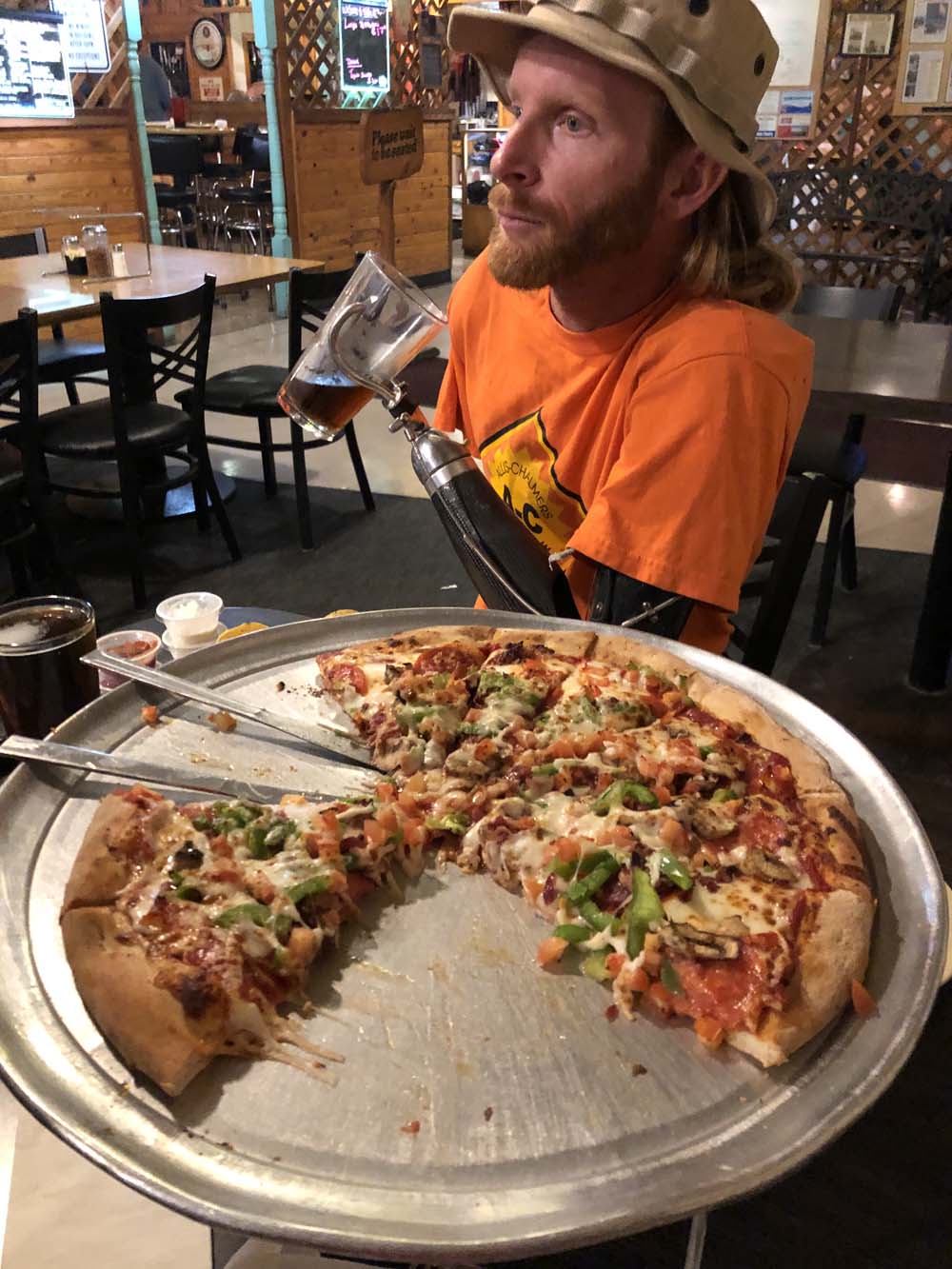 After cleaning up we went to "Silly Al's" in Quartzite for what has to be the best pizza that I've had in a long time! The beer was good too!